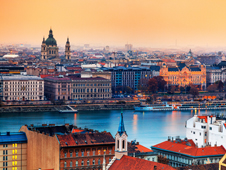 Car rental in Budapest from 19 euros per night

Budapest is the capital of Hungary and is considered to be a true European gem. Travelers, tourists and other visitors to Budapest are lots of interesting sights and beautiful places that is fraught with this magnificent city. It was in Budapest became a long history of the entire state. This is evidenced by the majestic palaces, theaters, neighborhoods built in the Baroque style, and more.

It is also an ideal place for shoppers and those who are happy to try new dishes and is not afraid to experiment.

Visit poster bookingcar.ru, you have the opportunity to take advantage of car rental at the airport in Budapest or in the central parts of the city.

Fines for traffic violations in Budapest

In accordance with the traffic rules by 2011 the police may charge a penalty to the driver for some of the violations on the spot in the amount of up to 300 thousand HUF (previously only allowed clearance of the payment order).

During the arrest car driver sent a notice stating:

In Budapest, there are speed limits are the same as in the entire state:

This is a common speed limit, you need to know, making out rental car in Budapest. However, if on a particular stretch of road the sign with other information, so you must follow it.

As in most large cities, not only in Hungary but also in other countries, in Budapest there is a problem with the number of parking spaces - namely, their disadvantage.

The city parking lots are divided into the following types:

Both types are mostly paid parking. So, on a weekday from 8.00 to 18.00, and on Saturday from 8.00 to 12.00 you need to pay an hourly fee for the use of a parking space. The only free day for parking - Sunday. Leave the car in the parking lot can be a period of from 15 minutes to 2-3 hours. Parking cost is determined by the distance to the center of the city and can vary within 120-400 HUF / hour.

Also in the capital of Hungary, there are special parking area marked «P + R». They are located close to public transportation and much cheaper.

In Hungary, there are fierce rules about driving a vehicle while intoxicated. Moreover, it is not allowed even a minimal amount of alcohol in the driver's blood, as allowable rate is 0.00 ppm. The police has the right to stop any vehicle to check the driver. For exceeding the allowed rate (depending on the degree of violation) provides severe penalties.

Rules of the road in Budapest

Drivers and all passengers must wear seat belts during the movement. If any of the passengers violates this rule, the penalty is issued to him.

Drivers are just in the process of movement is prohibited to talk on a cell phone. In order not to violate traffic rules, it is necessary to equip their device special wireless headset that does not distract the driver's hands on the car.

Young children (under 3 years) can be transported on any seat in the vehicle only if a special child seat, which corresponds to the weight of the child. If the passenger turned over 3 years, but its growth is less than 1.5 m, it must take a back seat.

The rental car in Budapest must be present:

In Hungary, the drivers are only the following types of fuel:

If you plan to travel a long distance, remember that the maximum amount of fuel that can be transported with the territory of Hungary in cans of 10 liters.

In Hungary, there are toll roads in large numbers. The country is among the countries in which to travel on the toll road is necessary to have a special vignette. In addition, there are only e-vignettes (e). They are sold in vending machines, gas stations, in small stores. Purchase online or via SMS-messages.

It is noteworthy that the vignettes are sold in areas located directly on the toll road. However, when entering the vignette without it, the driver is already committing a violation and undertakes to pay a penalty, even if it went with the intention to buy the e-vignette.

Vignette can be calculated on the following dates:

The estimated cost of the rental car in Budapest

Reviews
Travel to Budapest in a rented car

Average Rating 4.6/5 , 2176 opinions
Yoav Adereth
I traveled on the roads of Holland. There were block-stone roads almost everywhere. It was amazing. I rented the Mercedes C-Class and was satisfied with the comfort of the car and the comfort of the roads. In general, the trip was useful and helped to have a good rest and look at the country by car, not the way it is shown to tourists. If you look for a comfortable car for an affordable rental price, then I recommend this site.
yishai.shapira yishai.shapira
Me and my friends organized a car run around the countries of the Western Europe. We enjoyed the roads and everything new that we saw. Everyone rented what he wanted. And each of us was satisfied, as we didn't overpay. We searched for cars to rent via the Internet. We found cars and paid for them via this site and eventually we received all the necessary package included in the price. It's a very good approach, because you don't have to pay separately for each service.
yecheskel reich
We've got tired of traveling on arranged tours. All of them are a bit primitive. Recently we've decided to visit Greece by car. Impressions are quite different and you can see as much as possible, but the level of spending is much lower. We've rent a car via this site. We've found everything there, chose a car and paid for it. Everything is very simple, understandable and convenient. I recommend it to everybody.
Zinevych Serhii
We went to conquer the desert and flew to Dakar. We felt like real riders at the rally. We reserved the cars via this site in advance in order to get the necessary number of cars. We were pleased with a wide choice of cars, so each of us selected the car he liked. We paid for the cars directly and without fees via this resource as well. Everything was very good. In the future I'll use this portal with great pleasure.
By using our website you agree to our use of cookies in accordance with our cookie policy.
By using our website you agree to our use of cookies in accordance with our cookie policy.