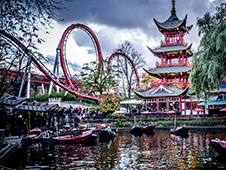 Car rental in Copenhagen from 13 euros per night

Copenhagen – the capital of Denmark, and one of the favorite cities among tourists from all over the world. Copenhagen is considered as one of the largest metropolises in Europe, while here the most amazing way united busy business life with numerous offices and shopping malls and numerous monuments of culture and art. The whole atmosphere of Copenhagen is literally riddled with clean sea air, comfort and a truly Scandinavian Danish hospitality.

In order to have time to visit as many interesting places and attractions of Copenhagen, it is best to use the services of a rental car, which will not only allow travel in comfort, but also give independence from public transportation schedules and will not delimit the freedom of movement.

Penalties for violation of traffic rules

On average for a traffic violation in Copenhagen are fines of 67 euros (for parking) to 2,000 euros (driving while intoxicated). And:

In Copenhagen, there are standard for most of the Scandinavian countries the speed limit:

Parking in Copenhagen allowed everywhere, where there is no prohibition signs and road markings. In the city center parking is prohibited, but there almost every building there are special parking pay by the hour. The cost of this service will depend on the distance from the center of Copenhagen: the further - the less.

The cost of parking in Copenhagen:

In Copenhagen, as well as in the rest of Denmark, for the refueling of cars are diesel fuel and 95-octane gasoline. The average cost of a liter of petrol here costs drivers about DKK 10.79, diesel fuel - 9.75 kroons.

The rate of alcohol in the blood

Despite the fact that in Copenhagen in Denmark in particular and in general, the maximum allowable rate of alcohol in the blood is 0.5 ppm (in Russia this figure is zero), traffic police are very sensitive to driving under the influence.

For violations of this kind are provided not only heavy fines of 1,000 euros, but a prison term of 10 years, life-long driving ban, as well as the confiscation of the vehicle. It is noteworthy that the drivers are tested not only on alcohol, but also drugs.

Average Rating 4.6/5 , 2176 opinions
volodimirs pupko
Be sure to rent a car when traveling around Germany. See the quality of their perfect roads with your own eyes. I looked for options, chose and paid for a car via this resource. I found the right option quickly. The price wasn't very expensive, and there were a lot of advantages when traveling. I recommend it, try it! I think I'll continue to use this site. Considerable saving of time and money.
Yulia Koshkina
We have been traveling around Europe for several years with the whole family and only by car. We have a great time when renting a van and driving along the most interesting places and excellent roads. We always use this site. We've seen countries not from the tourist, but from the most ordinary, but interesting point of view. The car aggregator always helps us. It is convenient to pay for the reservation on the site.
Vera Petrova
On the advice of my good friends we went on a road trip around Austria. We got great impressions and an opportunity to see a lot of interesting things. We rented the car at home via bookingcar. Due to this search engine we had a journey in an excellent car for modest price. We paid for the car via this site.
Zuzana Pudelska
During my business trips to other countries I travel a lot. Car rental has become an excellent solution for me. Since it is not always possible to rent a car quickly at the place of destination, I rent a car online. I\'ve tested many sites. Most of all I like bookingcar. The site always works good. There is a lot of options from a wide variety of providers. It\'s everything I need.
By using our website you agree to our use of cookies in accordance with our cookie policy.
By using our website you agree to our use of cookies in accordance with our cookie policy.