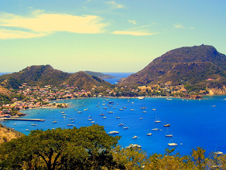 Rental cars in Guadeloupe from 30 € per day

Guadeloupe – this part of France, which is located in the exotic waters of the Caribbean Sea. The country is rich in violent and bloody history of today is a popular destination for tourists from all parts of the world. Once the island was discovered by Columbus and then for the locals it was the era of long ordeal and slavery: they captured England, then France, there was a short period of independence, after which power was transferred to the French again.

The outline of the main island of Guadeloupe remotely similar to a butterfly: it consists of two pieces of land, surrounded on all sides by the sea. One of them has a mountainous terrain, and the other – flat. In the fields still grow sugar cane, as well as in the days when slavery flourished in Guadeloupe. In addition, local residents are engaged in the export of bananas. Travel around the country is best by car, which can be rented on site bookingcar.ru. Just being at the wheel of the vehicle with the maximum comfort you can explore every corner of the island. Moreover, public transport runs regularly only in large cities, and the distances between settlements is very large. You can rent a car at the airport in Guadeloupe Pointe-a-Pitre Reza, after using the services bookingcar.ru.

The permissible level of alcohol

The maximum indicator of the presence of alcohol in a driver's blood should not exceed 0.5 ppm.

Park rent a car can be anywhere. The main condition for parking in Guadeloupe - the machine does not interfere with the movement of other vehicles.

Rules of the road in a rented car

It is necessary to take into account the fact that the local drivers are not too adhere to traffic rules, so the main roads of traffic jams often occur, and even aggravated by a very large number of traffic lights.

Reviews
Rent a car in Guadeloupe

Average Rating 4.6/5 , 2176 opinions
William Pedder
Last year we went on a trip with friends and rented a car. It turned out that all people travel that way. We had a great time. This year we've looked for a car via this resource on tha advice of our friends. Everything is easy, simple and understandable. The right car has been found in just a few minutes. We've been pleased with the low rental cost and an extended package of inclusive terms. We paid for the car on the site, and got it on time at the airport without problems.
yecheskel reich
We've got tired of traveling on arranged tours. All of them are a bit primitive. Recently we've decided to visit Greece by car. Impressions are quite different and you can see as much as possible, but the level of spending is much lower. We've rent a car via this site. We've found everything there, chose a car and paid for it. Everything is very simple, understandable and convenient. I recommend it to everybody.
Zakirova Albina
When we went to visit sunny Spain, we decided to do it by the car to see more sights and not to spend time sitting in the hotel. We searched for cars via several car aggregators, until we found this one. The most complete sample and very profitable offers. Despite our worries, everything was fine.
By using our website you agree to our use of cookies in accordance with our cookie policy.
By using our website you agree to our use of cookies in accordance with our cookie policy.