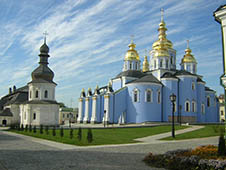 Kiev – ancient and incredibly beautiful city, the capital of Ukraine. It is located on the hills of the Dnipro River, dividing it into two halves. On top of that Kiev is the center of politics, economy, industry, and culture and science in the country ..

Kiev – one of the most "green" cities in Europe. There is a huge amount of green areas, parks and ponds. In Kiev, there are: about 60 parks, 68 museums; 100 institutions of higher education; two sites listed in the UNESCO list; More than seventy scientific institutions.

The main attractions of Kiev are concentrated in the central part – through them a large number of hiking trails. Most of the hotels are also located in the center. Rent a car at the airport of Kiev online bookingcar.ru, to travel freely around the city.

Subtleties of hire cars in Kiev: the penalties for violation of traffic rules

Immediately the police officer can not pay the fine. After the inspector will issue a fine, the driver has to pay it to the nearest bank. In connection with the new rules, the driver can not transfer their documents to the inspector (it can be shown through the glass even cars). Exceptions are cases where the police officer is necessary to remove the driver's documents in connection with violations of traffic rules last.

Fines can not be called rigid and significant. However, for certain traffic offenses provided for heavy fines, loss of driver's license, an administrative arrest, corrective labor.

In Kiev, there are both paid and free parking. In the center are mostly paid parking. Places for parking are marked with blue lines on the curb, roadway, as well as special characters. In the central part of Kiev parking costs about 10 hryvnia per hour. In other areas - about 7 hryvnia. For parking the driver can write out summonses to 680 hryvnia. Receipt for payment of parking space should be placed behind the windscreen for visual check of payment.

If additional information is not provided in the special characters, you must adhere to the following rules:

In addition, the maximum permitted speed for drivers, whose experience is less than two years, is 70 km / h.

The maximum rate of alcoholic substances in the body of the driver is 0.0 ppm. However, the driver will use the fines after his blood detect more than 0.2 ppm alcohol.

The penalty for exceeding the blood alcohol level of the driver is from 2,550 to 3,400 hryvnia. Inspectors may also withdraw the right to up to two years. In special cases, the offender, the driver threatened with administrative detention, or up to 50 hours of hard labor.

At relapse (for one year), the driver threatened with administrative detention (15 days) or deprivation of rights under 3 years, as well as community service (60 hours).

Prices for car rental in Kiev in the next date

Odessa from 19 euros per night

Average Rating 4.6/5 , 2176 opinions
VIKAS BAJAJ
We had a great trip to Poland. Most of the time we spent in small towns and farms. Everything was very nice and home-like. The car was rented in advance without a limited mileage. We got the required insurance package without overpaying via this site. We received a car in Warsaw without any problems.
Vicky Elizabeth Paterson
Among the numerous specialized car aggregators and search engines, this resource shows options that are missed by other resources because of the filters. Several times, I've found the most profitable offers here. Now I use only this aggregator and I'm confident in the quality of the search.
Zakirova Albina
When we went to visit sunny Spain, we decided to do it by the car to see more sights and not to spend time sitting in the hotel. We searched for cars via several car aggregators, until we found this one. The most complete sample and very profitable offers. Despite our worries, everything was fine.
Zuzana Pudelska
During my business trips to other countries I travel a lot. Car rental has become an excellent solution for me. Since it is not always possible to rent a car quickly at the place of destination, I rent a car online. I\'ve tested many sites. Most of all I like bookingcar. The site always works good. There is a lot of options from a wide variety of providers. It\'s everything I need.
Wojciech Cipilinski
I traveled along the roads of Andalusia. It was my dream. I visited several cities, including the beautiful Seville. I rented a car via this resource. When booking, I liked that I would take it from the airport, and leave it in any place convenient for me. The cost was more than affordable, especially since the full package of options was included in the base cost. I want to thank the site, it helped me very much and released from overpayment.
By using our website you agree to our use of cookies in accordance with our cookie policy.
By using our website you agree to our use of cookies in accordance with our cookie policy.