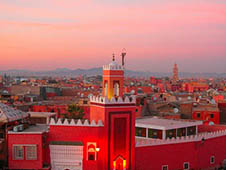 Marrakech directly associated with something magical. No wonder it is considered a tourist center of Morocco – tourists flock here from all over the world. Marrakech is full of history and different cultures, which are organically intertwined. A stay here is already in order to feel the amazing combination of European and Muslim customs and lifestyles. This city is like no one else, and unlike yourself – every day it's different. That diversity – a distinguishing feature of Marrakesh.

In order to explore the city and its surroundings at their own pace, the best solution – rent a car. The airport of Marrakech – Menara – landing planes many European destinations as well as domestic flights. Racks rolled at about half a dozen are on the first floor. Often, the machine must be a class or left, or the prices are very inflated. To avoid this, use the help site bookingcar.ru. Everyone can book a car at a good price, and it will be waiting for travelers upon arrival.

Features of the SDA in Marrakech, if you have a car for rent

Rent a car could face 23 to 60 years, with the right of international standard. Sometimes their lack of turning a blind eye, but not worth the risk. Traffic rules meet European, but the impression is that the drivers were forgotten.

Be very careful, especially if you have little experience driving: drivers can go through a red light, greatly exceed the speed, go on dividing strip. Movement also complicate spontaneous pedestrians, motorcyclists and horse-drawn carts that move very slowly and erratically.

Violate traffic rules is not necessary, but very carefully monitor the situation on the road you need. If drivers are beginning to dramatically diminish the speed, it indicates that the front of a police patrol. If you honk - the driver is going to break the rules and warn about it.

City traffic allowed on the speed of 40-60 km / h, it is necessary to follow the road signs. They are placed everywhere, are duplicated in French and Arabic. But this is not a problem, as the signs in Marrakech do not differ from the European ones. On other roads, provided such restrictions are:

Please note here that the roads are very good, but due to the characteristics of the traffic rules to be added to the expected travel time several hours.

Fuel for a rental car in Marrakech

Gas station in the city is no problem, you can find all types of unleaded petrol, diesel fuel or even gas. Basically, you can pay in both card and cash. Euro is usually taken without any problems, but it is better to carry also dirhams.

Refills in Medina there, and to call back in the car, too, is undesirable. The cost of a liter of any fuel - about $ 1 per liter.

As in any Muslim country, alcohol is not in favor of Morocco. It is sold only in recreational areas, mainly in tourist areas on the coast. Precise data on the limitation of not, but should refuse to take alcohol because of the nature of the SDA. Maximum adhere to European standards - 0.3-0.5 ppm.

Casablanca from 13 euros per night

Reviews
Rent a car in Marrakech

Average Rating 4.6/5 , 2176 opinions
Vitaly Lyubimov
Once we've tried to rent a car at the destination place and the provider's representative has said that they haven't been available because we are from Russia. Now we reserve a car in advance before departure. Since we've started to use this site, problems or difficulties in obtaining a car have never occurred.
wilhelm gloger
Car rental is suitable only for experienced drivers, as not everyone can drive in Rome. Nonetheless I\'ve decided to visit this ancient city by car. By the way, it is very interesting and unusual. It is easy to see the city from unconventional angles, inaccessible to tourists. I\'ve rented a car via bookingcar.eu. I\'ve liked the fact that the base cost\'s included insurance and other options that are necessary in a city with intensive traffic and a peculiar driving style.
Vitalii Miliaiev
We had an excellent trip to the Cote d'Azur. We visited small towns, which were calmer and cheaper. We traveled by a rented car. We booked a car and paid for rent via this resource. It's very convenient and inexpensive. We chose a mini-car, so we spent money on rental cost and fuel.
Vladylen Vavilov
I have been using this aggregator for a long time when searching for a car to travel around different countries. I know that the sample of options is always the largest, and there is no fees. I've compared it with the prices at the destination place for many times. In general, it helps to do everything in advance in a couple of minutes.
Yevsey Zagorski
We traveled to Israel and were very satisfied. We drove by car, which we took in the rental agency. We reserved a car and paid for it at home, and upon the arrival we got a car, which was used without restriction. It was convenient that the required insurance were issued immediately without additional charge, as it was included in the cost.
By using our website you agree to our use of cookies in accordance with our cookie policy.
By using our website you agree to our use of cookies in accordance with our cookie policy.