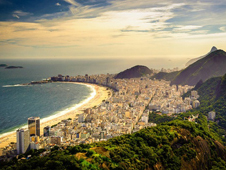 Rent a car in Rio de Janeiro from 28 € per night

The second largest city in tropical Brazil – Rio de Janeiro. The sight of his delightful scenery is breathtaking, and watch or take part in a spectacular carnival every year thousands of tourists from around the world. Not in vain the city is considered one of the natural wonders, through the hills of Tijuca located here, Kokovardo peak, the mountain with the unusual name "Sugar Loaf", Ipanema Beach and other attractions.

What could be better than a trip to picturesque places on a comfortable car? If you are going to visit Brazil, always make sure the rental car in Rio de Janeiro. Reserve a vehicle for yourself, please visit bookingcar.ru, and then pick up a car at one of the airport or in the city center, depending on your choice.

In Rio de Janeiro are the same speed limits, as well as throughout Brazil, namely:

The movement of vehicles are closely monitoring cameras and radars. Also common are considered to be "speed bumps."

Rio - a major city that does not have enough parking spaces. In most of hotels have special parking lots for visitors, while the owners themselves determine - to establish a fee for them or not. The same applies to large organizations, offices and various institutions.

The cost of parking varies according to the part of the city, day of week and time of day. When the number of vehicles is particularly high (in the output, peak hours), 1 hour parking price is 10 USD. Car owners can purchase a special parking cards (small newspaper or cigarette kiosks), which are designed for a different number of hours. Leaving the rental car in the parking lot, you need to mark the time of arrival and put a card behind the windscreen.

Due to the increasing incidence of road accidents caused by drivers who are in alcoholic intoxication, the government tightened the rules. The maximum permissible rate of alcohol should not be more than 3.2 DG / liter. For violation of this law, drivers expect severe punishment: a fine, driving ban, imprisonment. Application of punishment depends on the degree of violation.

In Rio de Janeiro, operates right-hand traffic and the basic rules are as follows:

Coming difficult to adapt to the peculiarities of driving, as the locals often do not follow the traffic rules, rarely reduce speed and overtake other cars at its discretion.

Sao Paulo from 14 euros per night

Reviews
Car rental in Rio de Janeiro: a review of the Brazilian roads