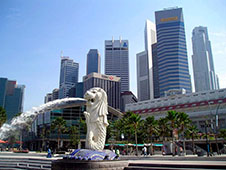 On the islands of Southeast Asia, next to the Riau Islands, the Sultanate of Johor has a wonderful city-state of Singapore, which is certainly worth a look, following the path in Indonesia, Malaysia, Thailand. Here anciently boiled trade port in the country hosted the court of Portugal, China and Arab states. Until 1965, Singapore was a British outpost, which is actively supported free trade. At independence, the city-state became the center of tourism with a strong network of hotels, recreation, entertainment.

In Singapore there, what to see first-class service. The country attracts colorful monuments, Buddhist temples that merge organically with the landscape, dotted with modern buildings, skyscrapers made of glass and metal. There are many restaurants and cafes where you can sample dishes from different nations. Travel across the country it's best to rent a car. Rent a car, you can visit the Changi International Airport, the center of Singapore. Traveler before the trip is to visit the site bookingcar.ru, online where you can choose any car, book it in advance.

Fines for traffic violations in Singapore

As there the rules when traveling on roads from 19:00 to 7:00 should be included daytime running lights. In case of violation the driver will pay a fine - 30 SGD. If the owner of the car gets to the court, he could be arrested for a period of six months, thus fined up to 1000 SGD.

Parking a rental car in Singapore

Singapore strict parking regulations stipulate that only allowed to park in areas designated for that purpose. There is always a sign in English which contains the value of the rules of parking. Parking is possible on the purchase coupon, payment of parking meters.

Bought a ticket, a check after the payment of parking meters should be placed under the windshield to ensure maximum visibility data.

Filling stations on the territory of Singapore's many, you can fill the tank of a vehicle with diesel fuel, unleaded gasoline 95, 98 brand. The only caveat - the high price of fuel. For example, the average cost of 1 liter of gasoline is now around US $ 1.67.

Allowable rate of alcohol for drivers of leased cars in Singapore

Moving along the routes of Singapore, the driver has no right to smoke, the more remain in a state of intoxication. For violation of the penalty, the amount of which is impressive:

If there was an accident caused by a drunken driver of the car, while there are victims, drunk motorist faces long or life imprisonment. In addition to the fine it added physical punishment: 6 strokes of rattan sticks

Reviews
An unforgettable journey in a rented car in Singapore