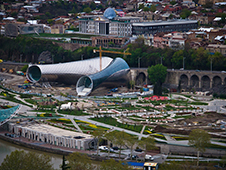 Car rental in Georgia from 30 euros per night

Tbilisi – is not just the capital of Georgia, is one of the most beautiful cities in Europe, which annually attracts thousands of travelers and holidaymakers from around the globe. Tbilisi – a city that defies the imagination, and fall in love with at first sight. In this wonderful part of the most intricately connected to the old, winding streets that are typical of most European cities and modern highways, which allow for the minimum time to get to almost anywhere in Tbilisi.

For trips around the city and its surroundings the best solution would be to take a rental car, which will give freedom of movement and make the stay even more comfortable and memorable. However, given the fact that the rules of the SDA in Georgia, somewhat different from Russian, is necessary to read them in order to rid yourself of problems with the local traffic police.

Fines for traffic violations in Tbilisi

To get around the city the driver must always have a passport, driver's license and registration certificate of the vehicle. Also provides for the following penalties:

The attempt to "negotiate" with the police can be regarded as a bribe, which is also punishable by a large fine. On most major highways Tbilisi no police patrols, but to violate the requirements of the SDA is not worth it, because literally everywhere installed surveillance cameras that record everything that happens on the road.

Generally in Georgia parking are free of charge, but Tbilisi is no exception to this rule. Payment parking space through the payment terminal service company or site. Paid receipts must be put on the inside of the windshield, otherwise the car immediately evacuated to a fine park, which costs 60 GEL.

In Georgia, in general and in Tbilisi in particular there is no such thing as toll roads, absolutely any sections of the route are completely free and are state property.