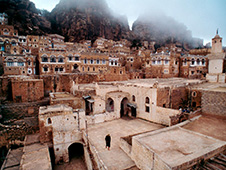 Yemen – one of the poorest, but the most interesting countries in the Middle East, as virtually all are steeped in thousands of years of history. People live in the ancient mud skyscrapers, their houses side by side with ancient ruins and mosques. The capital is one of the oldest cities in the world, which is still full of life. One of the main attractions of Sanaa – gate Bab el-Yemen, built seven centuries ago. No less interesting is the tourists and the central market of the capital.

The surrounding area is Sanaa Al Munakab valley and mountain city, resembles a fortress. The most famous settlement in the area is considered to Shibam – a kind of open-air museum. Rock is located north of the capital Dar al-Hajar, a long time served as a place of residence of the Imam. Nature lovers should visit the Yemen Socotra Archipelago. In this unique nature reserve there are a variety of endemic flora and fauna, and the locals speak a particular language, and fire by friction.

Seeing as many interesting places during the trip will allow car rental in Yemen. You can rent a car at the airport in the center of Sanaa or Aden, book your favorite model of car – on bookingcar.ru.

Traffic on the roads of the cities of Yemen is very chaotic, but local drivers practically guided by the SDA. Traffic lights a little, regulators are only at the main crossroads of the capital. However, serious accidents are rare on the streets because of restrictions adopted in the country. The maximum permissible speed:

Rent a car in Yemen: Parking

As the designated parking spaces in the small towns, the majority of Yemeni drivers put the car in the far right lane (sometimes even 2 rows). Natural cluster of machines there are various vacant lots, wide streets, squares. Specially organized free parking is near the hotels, restaurants, government agencies, large stores. Paid parking in Yemen almost there.

Yemen is a country with a dangerous movement, so his ways must be very careful. Local drivers often make risky maneuvers, speeding and drive on the wrong side. A person renting a car in Yemen, it is necessary to know at least the key rules:

Those who take a car rental in Yemen, be aware that the local oil is of low quality and meets only two kinds. Most filling stations offering petrol AI-80. It is more difficult with 92 octane fuel - it will have to search. The average price of AI-80 - 65 YER, AI-92 - 130 YER.

Reviews
Rent a car in Yemen

Average Rating 4.6/5 , 2176 opinions
waleed khaled ahmad alhamad
An excellent resource for finding cars that can be rented at the most popular providers. There are only reliable companies and available options. The choice can be made with the help of good working filters. There is sufficient variety of options, even at low cost. That is, it gives effective offers, and doesn't hide the most profitable variants. You can pay for a car via the site, a car can be obtained and returned at the airport.
Zofit Messa
I can't imagine a journey without a car. It's awful to drive by bus. I often use car rental services and arrange everything via this resource. Quite often I get excellent price offers when renting executive cars. I like direct payment without any redirections and lots of offers. Support service works promptly and efficiently at any time of the day, which is also a definite advantage.
walter de klerk
We organized a trip to Austria and rented a car for this purpose. We chose a standard car, and went to travel. We got a lot of new and interesting. We rented the car via this resource and were very satisfied, as we received a large package of options. Payment without fees was also made on the site. There were no problems with the car, both during the receipt and the return.
VLADIMIR VERSHKOV
We wanted to look at the rural scenery of Portugal and the life of small towns. We arrived without problems and at the destination place we got the car rented in advance via this aggregator. The full package of included insurance was very useful, as there was a small accident.
valerii linetckii
I used several site for car search and rental. A couple of times there were errors when I applied to the support service on other sites, and here they answered me immediately and helped to resolve some problems.
By using our website you agree to our use of cookies in accordance with our cookie policy.
By using our website you agree to our use of cookies in accordance with our cookie policy.