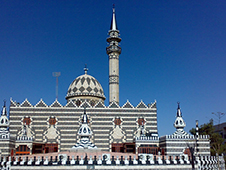 Amman – the main and the largest city in Jordan. It should be noted that it significantly stands out from the other major cities of the region. If you want to see the historical sights, the best to go to any other place because Amman has become a modern and highly developed city. For maximum penetration of the local atmosphere tourists are advised to be sure to visit the eastern and western part of the city that are complete opposites of each other.

Travel around the city the most pleasant on their own vehicle. For this you can use the services provided by the site bookingcar.ru, and rent a car at the airport in Amman, or in one of the central parts of the city.

In Amman, as well as throughout Jordan, vehicles can move only on the right side of the road. It is stated in the PDD the country, but in practice, local drivers are often neglected by all the rules.

If you intend to rent the car in Amman, after analyzing the speed limits that apply in the territory of Jordan. Do not pay attention and imitate the example of local drivers, which tend to desire to break the rules of the road.

The Government of Jordan is configured seriously enough regarding the violators of traffic rules. In order to reduce the number of road accidents caused by drunk drivers in Amman put a strict limit of alcohol in the body. Jordan - one of the few countries that completely prohibits drive a car while intoxicated, even the lightest, so the allowable rate - 0.0 per thousand.

If you put in Amman and Jordan in comparison with other states, the pricing here is average.