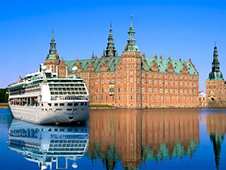 Rental cars in Denmark from 13 euros per night

Those who are just planning your vacation, be sure to think about visiting one of the most interesting Scandinavian countries – Denmark, which is a great place to relax completely in all respects. Many museums and cultural monuments, monumental historical sites, ancient architecture, castles and palaces and, of course, the magnificent nature and the sea – no doubt in Denmark have all you need every traveler.

Geographically, Denmark is one of the most southern among the Scandinavian countries, this small European country located on 409 islands. The capital of Denmark – Copenhagen is a city in which he lived and worked world-famous storyteller Hans Christian Andersen.

The Danes consider themselves descendants of the brave Vikings, they were madly in love their country and with the warmth and hospitality greet her guests. Getting to Denmark can be by plane or cruise ship at sea. All the other modes of transport locals prefer bicycles, which go for about 60 percent of the population. For those who prefer to travel in comfort, you should definitely think about renting a car through the service bookingcar.ru. What is required to get acquainted with the local traffic rules.

Rules of the road in Denmark

To journey to Denmark was perfect and left a very positive emotions and positive impression, you must comply with all the basic traffic rules that apply in this country:

Depending on the area in Denmark has the following speed limits:

It must be borne in mind that the Danish police strictly monitors all violations of speed limits. For these purposes, commonly used various radars and surveillance cameras. When the driver stopped by the police, you will have to pay a fine on the spot. And if surveillance cameras recorded the breach, the amount of the fine will be charged to the credit card of the driver of car rental company.

For parking rental car on city streets Danish drivers need to worry about buying a "parking disc". It is sold at almost every gas station, banks, post offices, travel agencies, as well as some police stations. Putting the car with the drive can be for a period not exceeding three hours.

You can park the car on the roadside, but no more than one hour and is strictly reserved for this time - on weekdays from 9.00 to 17.00, on the weekends - from 9.00 to 13.00. The disc is mounted on the side window of the car from the curb so that the arrow indicates the time when the rented car was parked.

In Denmark, it is strictly forbidden to drive a car or in a state of narcotic intoxication. The penalty for violation of this rule can be quite strict, by a fine of several thousand euros including imprisonment. To check the driver's police have the right to stop completely any machine at any time. At the disposal of the police, there are special devices that allow maximum accuracy, detect the presence of alcohol or drugs in the blood of the driver.

In Denmark, there is no such thing as a toll road. The only thing that will have to pay - a journey on the Great Belt Bridge and the Øresund Bridge. The cost of the fare is calculated based on the weight of the car, its length and height, the average fee is 18 (for motorcycles) to 99 (for vans with the principle of euros).

In that case, if the driver will pass through a payment station without paying, it will be imposed in the amount of 500 DKK.

Copenhagen from 13 euros per night

Average Rating 4.6/5 , 2176 opinions
Zakondyrin Alexander
I always travel alone. I get where I need and rent a car. Then I go where my heart wants. I like it very much. Once I failed to rent a car. After that, I began to use the services of online providers. This particular resource suits me best of all. I recommend it.
Yehochoua Suissa
If you want to drive along excellent roads, I suggest you should visit Ireland. I was there and got many positive emotions from traveling by car. I reserved a car and paid for it via this resource. It's nice that the price on the site includes almost everything. There is no overpayment or additional charge. I got a car with a full tank in the indicated place. You don't have to worry with this website.
Violetta Inozemtseva
I traveled all over the Baltics for business purposes. To save money, I decided to rent a car. In advance I found a suitable car and paid for the rental. I got it upon the arrival. I don't have any complaints about the reservation service and the rental company. I'm absolutely satisfied, as I managed to do everything I planned due to the mobility.
Zolotykh Ivan
We've organized a romantic trip by car in the most romantic place on earth, i.e in Tuscany. Impressions are amazing. It's a beautiful land, wonderful roads. We've found the car, reserved it and paid for it via this portal. Upon the arrival, we've got the car with a full tank and had the opportunity to leave it with an empty tank. It's been a nice gift from the comoany. We are happy.
Vyacheslav Minakov
My foreign friends offered me to rent a car while traveling and not to rely on agencies long ago. They also suggested this car aggregator. Undoubted advantages are the significant amount of results and cooperation only with the proven providers, as well as the possibility of direct payment without clickthrough. I like my first experience of car rental.
By using our website you agree to our use of cookies in accordance with our cookie policy.
By using our website you agree to our use of cookies in accordance with our cookie policy.