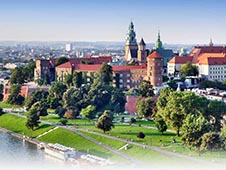 Krakow, once the capital of Poland, is today one of the most beautiful European cities. Around the Old City with hundreds of architectural monuments is a park Planty. The presence of the most valuable historical monuments and buildings led to the fact that Krakow joined the list of cities that fall under the protection of UNESCO. So, there still stands the Royal Castle, built in the tenth century. This building is a lot of time re-planned, reconstructed and now is the unique mix of Renaissance, Gothic and Romanesque.

In Krakow you can not just stroll through the streets of the city, but also to get into the real forest, wander through which recommends a map to avoid getting lost. You can also go to the zoo, to the observation deck, which shows most of the city, the monastery Camaldolese (but go here and do not always allow men and women in general, only 20 times a year). In whatever way you did not go, she will lead you to the city's main market area, which, moreover, is the largest in Europe. Around the Market Square – the palaces, churches and houses of stone.

The journey can be done by car, rented through the service bookingcar.ru. Getting off the plane at the airport Krakow Balice them. John Paul II, to sit in a rented car and go towards new impressions from historic Krakow.

Features of traffic in Krakow

95th and 98th unleaded gasoline only.

Liquefied natural gas - more popular fuel than gasoline. It should be 2 times cheaper.

At gas stations to pour gasoline on their own, and then go to the cashier and pay. For drivers have disposable gloves so as not to get your hands dirty.

The speed limit for drivers, including rented

You can park wherever there prohibits markings or signs. Pay and time-limited parking space marked with special signs.

Permitted blood alcohol content of the driver, does not exceed 0.2 ppm.

Average Rating 4.6/5 , 2176 opinions
Valeri Udler
We had a great time in England. Despite the difference in the traffic direction, we got used to it quickly. Naturally, we rented a car via this site. Payment was also made via the electronic resource. There weren't delays or negative experience during the car receipt. I liked everything very much.
Yoav Yogev
Recently I've toured Hungary. I've got amazing imressions and memories. I've rented a car. It's been very cheap taking into account unlimited mileage, full package of inclusive terms and ability to return the car in another place. Such luxurious conditions could be found with the help of this car aggregator. I recommend it, because now I use it constantly.
Wojciech Cipilinski
I traveled along the roads of Andalusia. It was my dream. I visited several cities, including the beautiful Seville. I rented a car via this resource. When booking, I liked that I would take it from the airport, and leave it in any place convenient for me. The cost was more than affordable, especially since the full package of options was included in the base cost. I want to thank the site, it helped me very much and released from overpayment.
Vadim
Many times I traveled around the countries. Before that I always chose a car for traveling via this site. For all the time it didn't upset me. It gives the most affordable options from the world's reliable providers. Such stability of operation makes me happy. I used it before, I use it now and I'll use it in future.
By using our website you agree to our use of cookies in accordance with our cookie policy.
By using our website you agree to our use of cookies in accordance with our cookie policy.