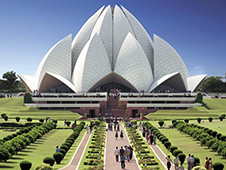 The capital of India is considered one of the districts of Delhi, New Delhi, rebuilt in the last century in the project plan, which developed the English architect Edwin Lanches. The total area occupied by the cultural and business center of the country is 35 km 2. At the Old City of New Delhi can rightly be counted among the list of the most ancient cities in the world. Here are located the main administrative offices, centers of India, the broad modern avenues are organically combined with ancient architectural monuments.

Area New Delhi – one of the most densely populated places on the planet. There are large numbers of co-ethnic, multicultural. Because most populous movement in the district is very intense. You can move around in public transport, thanks to the subway, rail, taxi, take advantage of autorickshaw. However, the best option will move the rental car at the airport in New Delhi. Also, you can rent a car directly in the center of the district. The most convenient way to do this in advance, for example, used the site bookingcar.ru.

Rules of the road when renting a car in New Delhi

Rent a car in New Delhi only if the documents. Be sure to be a passport, driver's license of international standard, the insurance policy. Also available is to be a bank card, for which India is possible to remove the desired amount. Rules of the road on the territory of New Delhi, there are, but locals often allow yourself to move on the road without any rules.

Movement in New Delhi on the left hand side, thus it is necessary to take into account the rule of "right of interference". At busy intersections regulators often work, but to establish order around endlessly darting little cars they manage.

The driver is required to pay a fine in New Delhi in the event, will be used in the process of mobile communications trip. Also have to pay a certain amount for smoking behind the wheel. In India since 2007 for it is punishable by law. Local traffic lights installed to control traffic. The driver is to monitor the traffic lights, which faces the direction of the route. Penalty on the road can be obtained in the case, if you start to move once on the side of the road came on "stop" signal.

On the roads of the area can be seen quite often "speed bump", marked with road signs. The city, especially the central areas, it is not necessary to accelerate, otherwise you may get a penalty for speeding in the wrong place. When driving on New Delhi should concentrate if there was near a cow. For the inhabitants of India, it is considered a sacred animal. If you have problems, the driver does not miss a cow, it would have to pay for the fine, while others hear unflattering opinion about his own person.

In India, there are toll roads, for movement within it will have to pay 10-30 rupees. However, these tracks feature top quality. Near the small towns, suburban dirt road, walk on it, the more so to find a compromise with the oncoming traffic there is very problematic.

Moving to rent a car on the roads of New Delhi to develop a rapid speed is difficult. Firstly, the reason for that - the road surface, which is often in a deplorable condition. On the other hand travel at high speed does not allow the flux density of cars, motorcycles.

Typical speeds are publicly and privately exist within the city - about 40-50 km / h. For a city with a quality track, things are even worse. In these segments move at high speeds is unlikely to succeed, the more it is simply dangerous to life.

Reviews
Features of movement in a rented car in New Delhi

Average Rating 4.6/5 , 2176 opinions
Valentina Savchenko
I went to Nevada. Of course, I rented a car via the website. The final cost turned out to be very modest, which gladdened me. Among all the search engines, this one showed the most profitable offer with a full insurance package for the minimum price. I chose it and paid for it via this site.
yecheskel reich
We've got tired of traveling on arranged tours. All of them are a bit primitive. Recently we've decided to visit Greece by car. Impressions are quite different and you can see as much as possible, but the level of spending is much lower. We've rent a car via this site. We've found everything there, chose a car and paid for it. Everything is very simple, understandable and convenient. I recommend it to everybody.
Valeriy Khomutov
We drove along the main routes of South Korea for business and information purposes. For greater comfort and freedom, we rented a car. The rental was issued and paid for via the website. At the destionation place about the agent gave us the car without many words. The resource operates very well.
Vilnis Burtnieks
I have been using car aggregators for many years already, I've tried many of them, and this site has turned out to be the most accurate. It allows you to search for the best offers from the providers. Any problems either in the process of registration, rental payment or receipt of a car from the agent haven't occured. I recommend it.
By using our website you agree to our use of cookies in accordance with our cookie policy.
By using our website you agree to our use of cookies in accordance with our cookie policy.