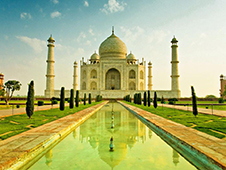 India – original country of the East, full of contrasts, bright colors and exotic customs. For centuries, it attracts travelers seeking to understand its religious secrets, learn all you can about ancient civilizations, rich flora and fauna of the local region.

The many faces of India attracts a variety of tourists. North Goa – a paradise for young people, ready to be entertained around the clock. There are many budget hotels, nightclubs and discos. For those seeking a quieter, relaxing stay there in South Goa. Ocean people come with money, and India meets its golden beaches, beautiful tropical scenery and luxurious hotels. Fans flock tours usually deep into the peninsula. They are interested in the "Golden Triangle", within which is Delhi, Jaipur and Agra. For these travelers, India has plenty of masterpieces of architecture and historic sites.

Getting around this vast country, of course, it's best to drive. Rent a car in India is better not to themselves, but through the site bookingcar.ru. This online book simplifies life tourist. Rental cars are available in all airports in the major cities of India.

Particularly dispersed on Indian roads is physically impossible, as the road surface is poor quality (if any), and in the cities of many "speed bumps" appear anywhere. The speed limit in built-up areas in India - 50 km / h.

Rent a car in India: Parking

In a country with a billion inhabitants of excess cars - one of the key problems on the roads. Find free parking spot in the big cities is very difficult, so the Indians skillfully put the machine close to each other. Many of the parking lots, including at the hotel, free of charge. The cost of paid parking on the territory of the parking lot - one of the lowest in the world (less than $ 2 a day).

Tourists, springs from a car in India should know that the laws in different states may vary. For example, in Kerala operates a total ban on alcohol for drivers. On the rest of the territory of India allowable rate of alcohol in the blood - 0.3 ppm.

In India, there are practically no signs, road signs and markings. Along with cars moving on the streets of elephants, camels and rickshaws. And pedestrians, and drivers often ignore traffic rules, so alien driving should be very careful to understand all this chaos.

Main motor fuel in the country - diesel. Petrol in India is difficult to find even in big cities. The average cost of a liter of diesel - 55 rupees, gasoline - 70 rupees. Prices in different cities across the country may differ slightly.

In India, all long-distance trails with quality coverage are paid. For travel on them the driver has to pay 10-30 rupees. The roads in the cities themselves, in general, satisfactory, but in the provinces are often narrow, unpaved, with a lot of sharp turns.

The estimated cost of car rental in India

Reviews
Rent a car in India

Average Rating 4.6/5 , 2176 opinions
Vladimir Shmidt
We had a wonderful trip along the evening desert while traveling to Dubai. We rented a car at home in advance via the site Bookingcar. We decided to do it due to the peak season of such trips in order not to remain without a car. There were no problems or difficulties in obtaining or returning the car. Everything was perfect!
William E Plumb
I spent the weekend in Italy and didn't miss the opportunity to drive a rented sports car. Of course, at home of the most supercars there is no other way. I rented the car via this resource. I can't say that it is cheap, but not enormously expensive. For me, it's important that this is the only car search engine that has found the required car. The payment is direct without fees here. I deliberately asked the provider about the price at the destination place. There was no difference in price. I recommend it to everyone.
Virginie Martin
We traveled to Israel and rented a car. We reserved a car via this resource. It gave the maximum number of options, among which we found the cheapest option. The car was very good. We returned it without problems. We didn't refuel the car as it was agreed. We recommend this aggregator!
Yuriy Barannik
The options that you are offered and the options that you find by yourself are always different. Recently I've been looking for options to go on vacation. I've decided to go to the agency (I've had no time at all). But when they've offered to reserve a car that would cost as a third part of that car for a week, I've been shocked. I've gone to the popular site and not only found, but also rented the required car at the ridiculous price.
Yingcheng Liu
For a long time we\'ve been engaged in extreme driving. Recently we were in Saudi Arabia. We rode along the desert. It\'s especially beautiful at the end of the day. There were admiration and danger and a host of other things. We rented a car via bookingcar eu. It\'s a very useful site, because it compares all world providers and gives a full base of actual options. It is convenient that you can pay everything without fees directly on the site. There are excellent offers, which we always take.
By using our website you agree to our use of cookies in accordance with our cookie policy.
By using our website you agree to our use of cookies in accordance with our cookie policy.