Main  /  Top Travel Destinations  /  Rent a car at about. Penang 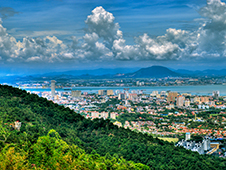 Car Hire on about. Penang

Penang – it's just a mecca for those who prefer passive recreation on the beach fun shopping, antiques and loves the nightlife. There are several markets around the clock, and at night the promenade is filled with disco lights. Also here only offer mini-cruises to the uninhabited island, so anyone can try yourself in the role of Robinson Crusoe.

But that's not all the differences. At about. Penang can be accessed not only via ferry, which goes to the city Batteruorh, but also on the Penang Bridge – it connects the island with the mainland of Malaysia, and is one of the three longest bridges in the whole world. If you prefer to travel by air – on Penang can fly both international and domestic flights, for example, c Kuala Lumpur.

The most convenient form of transport have a car. You can rent it in a variety of offices, which are in the airport or Georgetown – the capital of the island. There is always the possibility that you will not approach the selection or price, so it is best to book a car in advance. Choose the perfect transport to travel to Penang and save at the same time help the site bookingcar.ru.

Renting a car at Penang, you should know some features of the SDA

Rent a car could face from 23 to 60 or 70 years (depending on the class of the machine). To do this, lay claim to international standard, get up to them as national. Driving experience thus should not be less than 1 year.

The basic rules are no different from those in Europe: the seat belt is buckled sure, daytime running lights should be included only in the dark or when visibility is poor (which is very rare). The movement of the left hand side, so you need to be extremely careful.

As everywhere in Malaysia, a large choice of fuel: Unleaded gasoline 92, 95 and 98, diesel fuel. Rarely, but still caught the gas filling. The price twice lower than in Europe, 0.5-0.6 dollars per liter of fuel.

Gas stations are often found on the highways and in the villages, but they are less than the depth of Penang. You can usually pay off at the box office in cash in ringgit or credit card. But it is always better to carry cash when traveling out of town - where the card is not always taken.

The speed limit on Penang, if you rented a car

Carefully observe the traffic signs, speed limits can be different on different roads or sections of it. Typically, they are:

In Malaysia, the penalties are quite high. Drunk driving harshly suppressed. Redeem a fine is possible only through the official portal of the Road Service Malaysian credit card.

The estimated cost of car rental on the island. Penang

Reviews
Rent a car at about. Penang