Main  /  Top Travel Destinations  /  Holidays in Albufeira: Memo to the driver of the rented vehicle 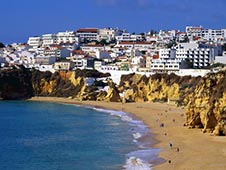 Portuguese resort town of Albufeira is considered part of the region Algarve. It attracts tourists with its mild climate, an abundance of golden sandy beaches, clear turquoise waters of the Atlantic Ocean. Up until the 60s. last century in its place was unremarkable fishing village. When its territory began to massively arriving tourists town quickly turned into a prestigious resort with a developed tourist infrastructure. Visiting Albufeira value measured for daily life, which allows you to take a break from everyday life, enjoy the magnificent beauty of wildlife.

In the evening the situation in Albufeira comes alive here start working night bars, restaurants, entertainment clubs. In addition to the resort of nightlife a lot of architectural monuments and museums. Visit a local restaurant, the visitor to enjoy the local cuisine, at an amusement park will see sea creatures in the mini-zoo – exotic animals. To move through the streets on foot, by public transport. The best option would be the rental car rental can be arranged in the center of Albufeira. Book liked best cars in advance, it can be done online at bookingcar.ru.

On the highways, urban roads Albufeira - hand traffic, thus overtaking is permitted only on the left side. During the trip, the driver, front passenger, rear seats must wear seat belts. Transportation of children up to 12 years is possible only in a car equipped with a special restraint. It is also worth knowing that a child whose age is less than 12 years old should ever sit in the front passenger seat.

When the driver is driving, he should refuse from talking on cellular if no corresponding headset frees your hands while talking. The owner of a car traveling through Portugal, should be aware that the use of devices that fix the radar, is strictly prohibited. Lights dim light during the trip should be included at all times. When the weather fog, to include fog lamps.

The speed limit for cars rented in Albufeira

Travelling on roads Portugal can be seen that the quality of the coating runs rather high. This is especially true of high-speed tracks, which attract motorists ride comfort. If we talk about the speed limits of the territory of Albufeira, the same rules that apply across the country:

Get behind the wheel of a vehicle on the roads of Portugal is not recommended limits indicators of intoxication for drivers are 0, 49 ‰. If the number is exceeded, the motorist will have to pay a fine in this case lose the right to drive for a while.

Parking the car, rented in Albufeira

Most Albufeira parking - paid, the standard fee for an hour of downtime is 0,8-1 €. On most Sundays free parking stations, some of them are practicing no service fees on weekdays. If you decide to put the car on a paid parking lot is to purchase a special parking ticket. This is an official document that indicates the time of arrival at the parking lot. It can be obtained from the hands of the employee, by the parking machine after payment newsagents.

Reviews
Holidays in Albufeira: Memo to the driver of the rented vehicle

Average Rating 4.6/5 , 2176 opinions
Victor Myasin
We went on vacation to the Balkans. We rederved cars in different countries so that there was a new car in each country. We drove each car for no more than 2 days. It was this search engine that helped a lot to find cars. It's not difficult at all. We recommend this resource)).
Yaqoub yousef aljarki
During the working trip on the company's business I had to move to the neighboring city quite unexpectedly. I rented a car via this site (online) just for fun and paid for it, while I was in the required city. Everything was done quickly and easily. I didn't even expect such results, although I use this site quite often. So I saved time and money, as a large package of options was already included.
Vladylen Vavilov
I have been using this aggregator for a long time when searching for a car to travel around different countries. I know that the sample of options is always the largest, and there is no fees. I've compared it with the prices at the destination place for many times. In general, it helps to do everything in advance in a couple of minutes.
Zofit Messa
I can't imagine a journey without a car. It's awful to drive by bus. I often use car rental services and arrange everything via this resource. Quite often I get excellent price offers when renting executive cars. I like direct payment without any redirections and lots of offers. Support service works promptly and efficiently at any time of the day, which is also a definite advantage.
William E Plumb
I spent the weekend in Italy and didn't miss the opportunity to drive a rented sports car. Of course, at home of the most supercars there is no other way. I rented the car via this resource. I can't say that it is cheap, but not enormously expensive. For me, it's important that this is the only car search engine that has found the required car. The payment is direct without fees here. I deliberately asked the provider about the price at the destination place. There was no difference in price. I recommend it to everyone.
By using our website you agree to our use of cookies in accordance with our cookie policy.
By using our website you agree to our use of cookies in accordance with our cookie policy.