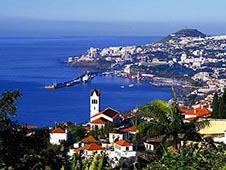 In the southern part of the island of Madeira, located in the Bay of Funchal, which borders the Atlantic Ocean. This world-famous tourist center of Portugal, beckoning travelers a warm climate, an abundance of flora and fauna, which has been preserved here in its original form. Exotic streets of the port city – a colorful mix of history and modernity. There are many historical monuments: castles, cathedrals, palaces that are worth seeing. On the slopes grow famous vineyards whose fruit is used to make first-class vintage wines.

Funchal Bay – a pier for cruise ships and international ships, yachts. Explore the surroundings you can harbor due to the funicular cable car, which, rising to the highest point, allows us to see the beauty of the city, the suburbs aerial view. To move through the streets of the resort town is most convenient by car. You can rent a car in the center of Funchal, Madeira International Airport, directly on arrival. The best option – to reserve a car online bookingcar.ru. The application is done in advance, online, from home.

Permitted alcohol concentration for drivers of cars in Portugal amounts to 0,49 ‰. Violations have consequences that such amounts are expressed:

On the territory of Funchal there are speed limits similar to those that exist in other cities of Portugal. On city streets is allowed to move at a speed of 50 km / h, for the national highways, the figure is 100 km / h. On motorways you can ride, acceleration to 120 km / h on all other areas - 90 km / h. Pavement on the territory of Funchal is good, but better quality considered high-speed highways. Speeding fraught fine, the amount of which can be seen in the following table:

The cost of fuel for cars rented in Funchal

Fill the car in Portugal can be diesel fuel, unleaded gasoline. Also, there are special stations that sell gas to fuel cars. Prices for all of the country is almost the same, while the law is authorized to carry gasoline in cans. The cost of fuel on the territory of Funchal as follows:

On the territory of Funchal, a lot of paid parking stations, the cost of services for the use of which varies from 0,8 € to 1 € per hour. The daily parking cost driver in 8-10 €, and in the city there are parking along the streets, but to find space there is almost impossible. When visiting the sights, you can leave the car on the free parking, the same kind of services typically provide a variety of hotels, tourist areas of the city. Terms parking on the territory of Portugal are different, prices vary based on the city, may depend on the time of day, day of the week, even a month. The main provisions of the parking lot following:

Parking violations punishable by a fine, the amount of which is 30-150 €.

Prices for car hire in Funchal on the next date

Average Rating 4.6/5 , 2176 opinions
Varga Andrea
I visited Moldova to research it. It was this search engine that helped me to find a good car for traveling, because the others simply ignored the country. I booked a rental and paid for it without problems on the site. I got the car easily. I'm satisfied.
Yakovlev Yevgeniy
I've already traveled about half of Europe. I rent a car and go wherever I want. I've used this resource for severa times. I've always managed to find and book what I need. There is always a large package of options, included in the cost, so you avoid overpaying. I like to rent expensive cars. I've already recommended this site to all my friends. It's nice to organze travel via this site.
Violeta Eiderman
Of course, Beijing is not for everyone, but I came to my friends in the suburbs and they recommended to rent a car, as it was cheap, fast and safe. I found the suitable option via Booking Car. I booked the car and paid for it in a matter of minutes. I satisfied with the operation speed of the site.
Yaqoub yousef aljarki
During the working trip on the company's business I had to move to the neighboring city quite unexpectedly. I rented a car via this site (online) just for fun and paid for it, while I was in the required city. Everything was done quickly and easily. I didn't even expect such results, although I use this site quite often. So I saved time and money, as a large package of options was already included.
wayne robert donohoe
I considered a variety of car aggregators and car rental sites. This resource has become the most reliable among others for me. The main point is the lack of redirection when paying, that means the minimum risk of phishing or infection of the computer, which is extremely important for banking transactions and other types of payment. So I strongly recommend the most reliable site.
By using our website you agree to our use of cookies in accordance with our cookie policy.
By using our website you agree to our use of cookies in accordance with our cookie policy.