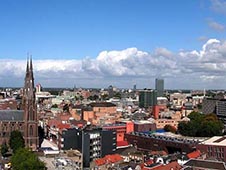 Eindhoven – a modern city in the Netherlands, the center of the current design and art. It is characterized by a large number of houses in a modern style (asymmetric windows with unusual shapes). Also, tourists are amazed to public transport, covered with "flower" roofs, glass domes local supermarkets and other interesting features of the city.

The most convenient way to travel around the city, with own vehicle – you can rent a car at the airport in Eindhoven, using the services of the website bookingcar.ru. In Eindhoven offers interesting museums, evoluon futuristic building, the tallest skyscraper local – Admirant and many other attractions.

The rules of the road of the Netherlands provided numerous violations, making the drivers who receive large fines.

Driving a rented car on the toll roads of Eindhoven

In Eindhoven, the lack of roads, the fare for which you have to pay, but you can use some of the tunnels only after the payment. Netherlands tunnels are among the safest in the world, because security - the main goal to which aspire in their construction. The fare on the tunnel depends on the type of vehicle, for example, for cars with up to 3 m payment is around 5 Euro.

For each type of road provided its speed limit:

Restrictions are also dependent on the type of vehicle. The above rules are related to cars without a trailer.

Dutch law established that the alcoholic content of substances in the body should not exceed the mark of 0.5 ppm. This is not the strict restriction compared to other states, but not the most loyal. The fact is that the zero indicator is sometimes impossible, for example, after the use of certain drugs, etc., although in many countries is a limit to 0.0 ppm.