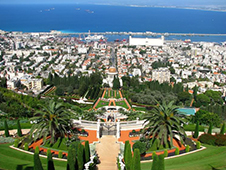 Haifa – one of the most beautiful and interesting cities in Israel, located on the slopes of Mount Carmel. Every year thousands of tourists come here to relax on the Mediterranean coast, to touch the past several peoples: Jews, Romans, Arabs, French and Germans.

In Haifa, travelers should visit the area of ​​Carmel: admire the beautiful panorama of the city, opening from the top of the mountain, to visit the ancient monastery of Stella Maris Carmelite Order. His originality captivates tourists and the German Colony. This area of ​​the city thanks to the German settlers came Templar. Another attraction of Haifa – Bahai gardens and the tomb of the Prophet Baba. The name of another religious figure linked to one of the caves of Mount Carmel. According to legend, there lived the prophet Elijah.

To move freely around the city, you can rent a car at the airport of Haifa, pre-booked it online bookingcar.ru. The quality of the road surface in Israel is excellent and the journey by car takes only pleasure.

Fines for traffic violations in Haifa

Israel has a tough grading penalties. In case of late payment penalty is charged: within 90 days of the initial amount increased 1.5 times, then - by 5% every six months.

Free parking in the city a little, and they are more common in the suburbs. Paid parking is usually equipped with guns for non-cash and cash payments. Payment for parking can be made in another way - buy in the store or at the post office a special voucher. The cost of using parking - $ 1-6.

Police in Haifa has the right to have any driver to demand passage of Alcotest. A refusal to test relies severe punishment. According to the SDA Israeli blood alcohol content of the driver should not exceed 0.5 ppm. Control cars in a drunken state - a serious violation of providing a huge fine and driving ban.

Prices for car rental in Haifa for the next date

Reviews
Rent a car in Haifa