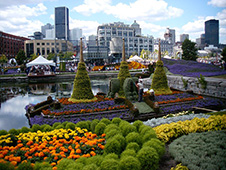 Montreal – fairly large Canadian city, which occupies the second largest. It belongs to the province of Quebec and is located among the river islands. The city is very harmoniously combined historical monuments and elements of modern life: tourists can see in Montreal beautiful cobbled streets, ancient architectural objects, as well as scenic parks and vast skyscrapers.

The symbol of the city is a mountain called Mont Royal, on top of which is the famous Catholic cross height of 70 m and the extraordinary beauty of the park with the same name. Rent a car at the airport or in downtown Montreal on the site bookingcar.ru and travel around the city without restrictions.

In Canada the SDA may vary depending on the province. However, there are some general rules for all states:

Permission to park only in designated areas. In Montreal, parking lots are marked with special guns called Parcodon. In contrast to the European tradition, parkodony installed along streets and require the driver make the payment. Do not count on the fact that no one will notice improperly parked cars - the streets are patrolled by the police every 10-15 minutes. For unpaid parking you immediately discharged a penalty.

Outside the maximum speed depends on the location and type of road. Furthermore, in some areas impose additional restrictions. On the signs you need to pay special attention to - the driver is always warned about the features of the motion at a specific site:

On signs also present information on the penalties: the more you exceed the speed over the amount of the fine - up to 10 000 dollars.

Montreal is located in the state of Quebec - the maximum permissible level of alcohol in the body of the driver here may differ from those of other provinces. In this state, particularly in Montreal, allowed driving vehicles, if the content of alcoholic substances does not exceed 0.8 ppm mark. This is a fairly high level, especially given the fact that many States are not allowed to drive even at 0.1 ppm.

The estimated cost of the rental car in Montreal