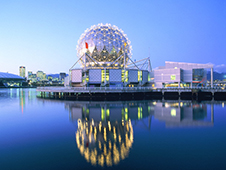 The picturesque town called Vancouver is located in the south-west of Canada. He is considered one of the most important ports in North America and is the largest city in the province. The main natural attractions of Vancouver – Hollibern Mountain and Mount Seymour, as well as a large number of rivers. Tourists in the city attracted popular ski resort – Whistler, in addition, there are concentrated many beautiful beaches, because Vancouver is located on the Pacific coast.

You want to travel around Vancouver by car? You have the opportunity through the site bookingcar.ru, with which you can rent a car at the airport in Vancouver (or in the central part of the city).

Rules of the road, you need to know when renting a car in Vancouver

Most of the traffic rules coincides with the international, however, in Vancouver, there are some subtleties:

Vancouver and the entire province as a whole, to which he belongs, is considered the most stringent in terms of the allowed rate of alcohol in the entire state. The maximum content of alcoholic substances in the body of the driver should not exceed 0.5 ppm by local rules. Otherwise, the violator will face serious punishment - not only fines but also the loss of rights.

Many stretches of road in Vancouver equipped with additional guidance with respect to the speed limit. If these signs are not seen anywhere else, follow the standard rules:

Vancouver is characterized by a large number of different types of parking. Advantageously, the parking need make the payment. The city can also be found above ground and underground parking. With regard to free parking, they are distinguished by complex rules and conditions, which are always negotiated in the special information signs. Improper parking is fraught with a fine, the minimum of which - 20 Canadian dollars.

Average Rating 4.6/5 , 2176 opinions
Yakovlev Yevgeniy
I've already traveled about half of Europe. I rent a car and go wherever I want. I've used this resource for severa times. I've always managed to find and book what I need. There is always a large package of options, included in the cost, so you avoid overpaying. I like to rent expensive cars. I've already recommended this site to all my friends. It's nice to organze travel via this site.
waldemar papuzynski
I had to travel a lot to different cities of Macedonia on business. In order not to spend a lot of money on trips, I rented a car via this aggregator before the departure. The choice was made in a few minutes, I paid for a car via the site, and there was no problem with the car at the destination place. I recommend it to those who save time and money. The site is reliable, the sample is large even for captious people.
yishai.shapira yishai.shapira
Me and my friends organized a car run around the countries of the Western Europe. We enjoyed the roads and everything new that we saw. Everyone rented what he wanted. And each of us was satisfied, as we didn't overpay. We searched for cars to rent via the Internet. We found cars and paid for them via this site and eventually we received all the necessary package included in the price. It's a very good approach, because you don't have to pay separately for each service.
By using our website you agree to our use of cookies in accordance with our cookie policy.
By using our website you agree to our use of cookies in accordance with our cookie policy.