Main  /  Top Travel Destinations  /  Car rental in Pomorie, or how comfortable traveling to the Black Sea 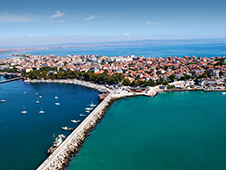 Rent a car in Pomorie from 9 euros per day

Pomorie is a gorgeous resort town on the shores of the vast Black Sea. This is a true peninsula that on three sides by the gentle sea. The city's history goes back more than 2500 years. There are incredibly beautiful, there are many ancient shrines, interesting sights. The city is famous for the International Festival of Orthodox Music. In addition, there is a therapeutic salt lake, where production from the dirt. Pomorie In a lot of hotels and resorts. Therefore, tourists are constantly coming here all year round!

Enjoy all the beauty of the city will help car rental in Pomorie. It will not only help to move around the resort, but also on their own to go to the nearest city with a sightseeing purpose (in Burgas, Nessebar, Sunny Beach and others.). Request car rental in Pomorie, please visit bookingcar.ru. On the vehicle to make a journey will be much quieter and more comfortable.

Rules of the road in Pomorie

Taking a car rental in Pomorie, you must not forget about the observance of the rules:

Fines for traffic violations in a rented car

If a foreign driver who rented a car in Pomorie, violate traffic rules, the police draw up a report and issues a receipt. The penalty is mandatory to be paid until such time as the driver to continue driving. We can not give money to the police. Pay fines only in the bank or bank transfer. Those penalties, which do not exceed 50 BGN, not subject to appeal.

If a foreign driver's driving license has been withdrawn, then at the end of the ban on driving a document is sent by post to the place where it was issued.

Within Pomorie speed limit - 50 km / h if there are no signs. If you exceed the speed limits of the city, shall be fined:

In the case of speeding over 50 km / h and provided more deprivation of rights for a period of 3 months.

Parking spaces in the city are marked in green or blue. Many parking lots are paid. This was notified special characters, which is listed and the cost of services. Their absence implies the possibility of free parking.

Prices for car rental in Pomorie on the next date

Sofia from 9 euros per day

Varna from 9 euros per day

Bansko from 9 euros per day

Reviews
Car rental in Pomorie, or how comfortable traveling to the Black Sea

Average Rating 4.6/5 , 2176 opinions
Vladimir Shmidt
We had a wonderful trip along the evening desert while traveling to Dubai. We rented a car at home in advance via the site Bookingcar. We decided to do it due to the peak season of such trips in order not to remain without a car. There were no problems or difficulties in obtaining or returning the car. Everything was perfect!
ZEKI SAHINOGLU
Our big company went on the roads of Italy. The final goal was Venice. We rented a minivan and did not regret it. The conditions were great, and the rental cost was ridiculous as we chipped in together. We've selected a car here, since this site gives the opportunity to find a car that can be returned not in the country where it was received. We liked everything very much. There is easy navigation and simple search filter on the site. It's impossible to get confused.
Yeloyev Valeriy Vladimirovich
We had a nice trip on the roads of Scotland. There were a lot of small towns and each of them was very cozy. Beautiful nature and lots of greenery. We rented a car at the destination place, while booked it and paid for it via this resource in advance. We were pleased with a wide choice. Particular attention should be given to the fact that the insurance is included in the rental price. There are no additional charges.
Zakirova Albina
When we went to visit sunny Spain, we decided to do it by the car to see more sights and not to spend time sitting in the hotel. We searched for cars via several car aggregators, until we found this one. The most complete sample and very profitable offers. Despite our worries, everything was fine.
Vicky Elizabeth Paterson
Among the numerous specialized car aggregators and search engines, this resource shows options that are missed by other resources because of the filters. Several times, I've found the most profitable offers here. Now I use only this aggregator and I'm confident in the quality of the search.
By using our website you agree to our use of cookies in accordance with our cookie policy.
By using our website you agree to our use of cookies in accordance with our cookie policy.