Main  /  Top Travel Destinations  /  What should know the driver, traveling the roads of Slovenia 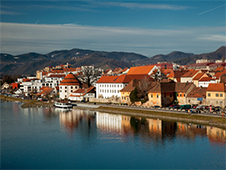 One of the most unique of the northern part of the Balkan Peninsula is considered to Slovenia. The exact origin of the name is unknown, which adds a touch of sophistication to the state, mystery and romanticism. Slovenia – a country with a well-developed tourism infrastructure, although this trend appeared here recently. Travelers from all corners of the earth attracted by the rich nature of the country, lakes, ancient cities, which lie in the picturesque landscape. Also, the country is famous snow-capped peaks of the Alps, at the foot of which lie the cozy ski resorts, health resorts.

On the territory of Slovenia is something to see, which are, for example, unique caves, ancient churches, castles, buried in there the greens. The best mode of transport to move around Slovenia will rent a car, which can be obtained at the airport in Ljubljana, Portorož, Maribor, Ljubljana railway station. It is also possible to rent a car in the center of cities such as Bled, Maribor, Ljubljana, Celje, Kranjska Gora, Portoroz. The most convenient way to book the vehicle in advance by visiting bookingcar.ru.

For free movement along the routes of Slovenia will have to buy paper vignette. Its value depends on the tonnage of the vehicle, his tenure on the road. Rates can be seen in the following table:

Also, you should know that for moving the tunnel Karawanken have to pay a fee. Where to buy a vignette? The document gives the right of way, you can buy on the territory of large shopping centers, gas stations, border crossing border points. Vignette attached to the surface of the windshield. On expiration, it is removed.

Parking for cars rented in Slovenia

On the territory of the country's major cities have a wide network of paid parking, equipped with machine guns. Payment can be effected in the form of text messages sent from a mobile device. As an option - to pay for parking in cash. The approximate cost of parking is 0,4 € per hour, you can leave the car for half an hour, an hour, two hours.

If the billboard unspecified time allowed for parking cars on this site can be left free holidays, weekends. For weekdays, there are restrictions on the time from 19:00 to 9:00. On the territory of the small towns have parking areas, where free parking is permitted from 12:00 to 13:30.

Improperly parked cars may lead to blockage, including confiscation. Also, for violation penalties:

Moving on the territory of Slovenia, you can see a large number of filling stations that offer to buy diesel fuel, unleaded gasoline grades 95, 98. Also, the country can meet the station, which is carried out with gas filling. The cost of fuel for Slovenia is about the same everywhere, it is the following amounts:

Ljubljana from 11 euros per night

Reviews
What should know the driver, traveling the roads of Slovenia