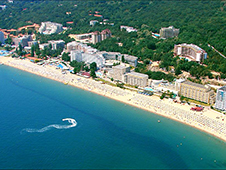 Car rental in Golden Sands from 9 euros per day

One of the most popular resorts in Bulgaria are considered to be the Golden Sands. It attracts tourists from all over the world. It is located just 17 kilometers from the Bulgarian capital, the city of Varna.

Tourist resort life boils constantly. There is absolutely everything that was a great vacation:

Near the Golden Sands is a huge number of tiny villages and surprisingly beautiful. All of them can be visited by renting a car in Golden Sands. This will quickly and comfortably move to any point of the resort, enjoy the local flavor and fun. Book car desired configuration can now online bookingcar.ru. Rent a car in Golden Sands allows you to enjoy all the corners of the magnificent beach, and even a trip to the neighboring town to see their attractions.

Plenty of parking at the resort are paid. The cost of one hour, then an average of about 1 euro. Areas where you can park, marked the streets in green or blue. If there are no signs of the parking lot, it is free.

Failure to comply with parking regulations will be fined - the sum from 20 to 50 BGN. It is believed the penalty for those who are parked in places specially designed for the disabled. Its amount is 200 BGN.

The level of alcohol in the driver's blood in Golden Sands permitted to 0.49 ‰. Police stopped the car, have the right to conduct an audit. In the case of a positive test, the driver must pass a blood test. This procedure is performed in a medical facility. If the admissible norm is exceeded, it is necessary the penalty:

If the driver of the leased cars in Golden Sands refuses to be tested for drugs or alcohol, it will be fined 2,000 BGN, and the action of his driver's license will be suspended for 2 years.

The standard speed limit in the resort:

The resort Golden Sands is available at filling stations 95, 98 neetilinovanny gasoline and diesel fuel. There are gas refueling. The average price statistics for 2015 as follows:

And if you want to go on a long journey to the resort, it is worth remembering that with him, in the canister, are allowed to carry no more than 10 liters of petrol.

Sofia from 9 euros per day

Varna from 9 euros per day

Pomorie from 9 euros per day

Bansko from 9 euros per day

Average Rating 4.6/5 , 2176 opinions
Viktor Brujev
I often come to Saudi Arabia and every time I travel around the country a lot. For this purpose, I always rent a car. It's very cheap, fast and comfortable. I always look for optimal options via this search engine. It's a great site that really helps.
Zofit Messa
I can't imagine a journey without a car. It's awful to drive by bus. I often use car rental services and arrange everything via this resource. Quite often I get excellent price offers when renting executive cars. I like direct payment without any redirections and lots of offers. Support service works promptly and efficiently at any time of the day, which is also a definite advantage.
Xiao-Wen Terry Liu
We traveled very often, but because of the price increase we began to save money. Recently we tried to travel by a rented car on the advice of our good friends. It turned out to be more interesting and cheap. We saw many wonderful places. We looked for a car on this site and were worried that we managed to do it. Upon the arrival we got a rented car without any problems. We turned it also without difficulties. We are satisfied.
Victor Myasin
We went on vacation to the Balkans. We rederved cars in different countries so that there was a new car in each country. We drove each car for no more than 2 days. It was this search engine that helped a lot to find cars. It's not difficult at all. We recommend this resource)).
By using our website you agree to our use of cookies in accordance with our cookie policy.
By using our website you agree to our use of cookies in accordance with our cookie policy.