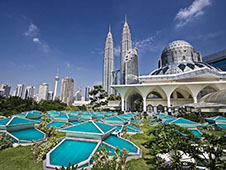 Malaysia – a country very beloved by tourists. Tall buildings are contrasted here with clean beaches, towering mountains and exotic plants. Malaysia attracts all fans of the east direction and eco-tourism by its diversity (including cultural) and low prices. The most famous attractions of the country – is: Petronas Twin Towers, National Park Tamang Nagara, Penang Bridge, and so on.

In order to get the most of your trip and see as much as possible parts of Malaysia, you can rent a car. At any airport, as well as the port of Malaysia, you can expect the desired mode of transportation. Due to the constant influx of tourists needed a car may not be in the office, or you will not work the price. To exclude such options and save a substantial part of the money necessary to take care of the rental car in advance. This site will help bookingcar.ru.

If you rent a car in Malaysia, you need to know the features of PPD

Rent a car can be a driver aged 23 to 70 years, if it has both national rights and the rights of international standard.

Malaysia - a former British colony, here drive on the left and all right-hand drive cars. The basic rules are the same as in Europe, but has its own motion features:

Fuel in Malaysia for leased cars

In the cities, near the national roads and motorways have a filling on each small area. But, if you go a little deeper, they caught less frequently.

How can refuel with petrol 95 and 98, as well as diesel and gas. The price per liter of fuel half the average - about $ 0.5. In the city, you can pay in cash in the national currency - Malaysian ringgit and credit cards. Outside the city, it is always better to carry enough cash to pay for fuel and toll roads.

Police in Malaysia are quite loyal to foreigners, but the fines are discharged. Pay them only through the website of the Road Department of Malaysia. The main types of penalties:

Roads in the city and state are always free. Pay highways are mainly suited to the big cities, the fare may be charged both at the beginning and at the end. Payment is accepted only in cash at the rate ringgit. The average fare for a private road is 2 - 5 dollars.

Reviews
Rent a car in Malaysia