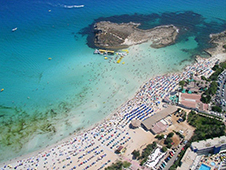 According to Greek mythology, a beautiful town called Paphos, located in the southwest of Cyprus is home to the beautiful Aphrodite. The town consists of two parts: commercial and tourist. The commercial part of Paphos is located on a hill, it includes the administration of the market and various institutions. Tourist Area is located near the coast – this is where all the hotels are concentrated, for recreation and entertainment. The resort is oriented on "adult" audience – local conditions are not suitable for families with children.

To travel around the city more comfortable to use a personal vehicle – for this you can rent a car at the airport in Paphos, place your order online bookingcar.ru.

Rules of the road, you need to know the tenants car in Paphos

In the city, the following rules of the road:

Serious violations of traffic rules is drunk driving. Each country has individual rules and regulations. Cyprus is characterized by a neutral position - in Paphos you can drive a car provided that the level of alcoholic substances in the body is not more than 0.5 ppm. This average rate of alcohol permitted.

Paphos features a large number of paid parking. Belonging to the privileged category of the population of people can park for free on any lot. Parking is prohibited in the areas of transport, marked double solid yellow line (near single band can be stopped temporarily - for loading / unloading). In the central part of the city parking costs about 0.4-0.6 dollars per hour.

Cyprus is directly related to the states, which are characterized by the highest pricing of the fuel used for refueling cars and other vehicles. Paphos at a gas station fuel is sold by the following value: