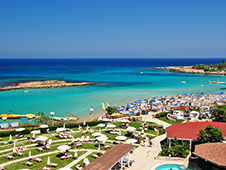 Car rental in Protaras from 7 € per day

Along the famous Cypriot Bay fig tree is one of the most famous cities on the coast of Protaras. Once deserted bay has now become a popular resort center, golden beaches that dream of thousands of tourists visit. The town is famous for its picturesque coves, well-developed infrastructure. It is a peaceful place where you can relax wonderfully newlyweds, family, noisy company. Hotels, apartments beckon attractiveness, comfort, and for quite a reasonable price.

Here, every detail is thought out for the maximum comfort of visitors. During the day you can visit the Côte d'Azur, soak in the clear waters of the Mediterranean. In the evening you can relax in a local restaurant, pub, enjoying the amazing cuisine, cool fruit cocktails, drinks stronger. Here, in Protaras, you can rent a car, allowing to move freely around the city, the surrounding area. To journey delivered the ultimate in comfort, rolling car can be ordered in advance online bookingcar.ru.

Fill the rented car in the territory of Protaras simple. Gas stations scattered around the city, beyond here is enough. The only caveat - have to fill the tank completely. Cyprus law does not permit transport with a fuel cans. The cost of fuel at petrol stations in Protaras is available, the price is the same everywhere.

Get behind the wheel while traveling on Protaras drunk is permitted blood alcohol concentration up to 0,5 ‰ inclusive.

Availability fastened seat belts for drivers and passengers - a prerequisite for the free movement routes of Protaras. Failure to comply with the rules will cost 85 €. The same amount will have to pay the owner of transport, which in the course of driving talking on a cell phone without a special headset. When renting a car in Protaras is 2 check for emergency signs, which will be useful during an emergency stop on the road of the resort. In addition, the driver should remember that the law of Cyprus is prohibited to use radar detectors, navigation equipment.

Exceeding the speed limits for drivers of Protaras is fraught with penalties. The amount is calculated as a percentage, based on the excess of 1 km.

The summary table will help determine the size of the penalty for certain cases:

Fines for traffic violations in Protaras

Rules of the road is carried out strictly. If the law is violated, the driver of the machine will have to pay a fine. The size of bribes depends on the seriousness of the offense, the amount paid in police stations throughout the city, the municipal authorities of Cyprus. The fine for a number of offenses are presented in the following table:

Properties leased car parking within the boundaries of Protaras

Park Vehicle in the territory of Protaras is permitted in designated paid or free parking. In this machine it has allowed only in the direction of movement. In violation of established law will have to pay 85 €. Parking fee is the same everywhere, ranging from 0,4 € to 0,6 € per hour, and people with disabilities service is free.

Leave the car at the edge of a double yellow line is strictly prohibited. If a single yellow line, you can temporarily stop to load or unload the car. Leave the car for a long time at this place is also prohibited. To learn where the nearest car park, inform the appropriate sign, white marking along the sidewalks.

Payment will be charged to the private parking attendants parking, municipal parking lots are equipped mainly with machine guns. Above each unit has a label that can be seen from afar. To know how much will cost parking, is to set a time, then put it in the slot corresponding to the number of coins. The amount paid is displayed on the display, after which the driver of a car receives a check for payment.