Main  /  Top Travel Destinations  /  How to explore Bristol? In a rented car! 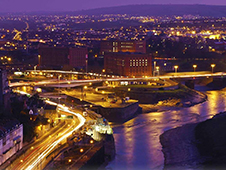 Car rental in Bristol from 23 € per night

Bristol is certainly not a metropolis, but this pretty town of Great Britain deserves to visit it. Is the center of the ceremonial county of the same name, that is ruled by it the Lord Lieutenant. Situated on the River Avon, which flows in the southwestern part of the country. Old Town is located on its right coast. Left occupied the suburbs – Clifton and Radcliffe.

What interest? Undoubtedly, the main attraction – Bristol Cathedral, built in the Gothic style in the 12-16 centuries. Previously, it was the abbey church of St. Augustine. Council it became during Remormatsii. The city also remained ruins of the church of the Knights Templar – as a reminder of the devastating raids by German bombers during the Second World War. It is also interesting to look at the Cabot Tower, Theatre Royal Colston School, a building which is already more than one hundred years.

And go on sightseeing very convenient by car, which can be rented in Bristol, using the services of service boocingcar.ru.

A ride on the roads of Britain and Bristol in particular worth, given the restrictive standards. This allows you to avoid penalties that could significantly "facilitate" a purse. Tolerance - 10%, to which you can add more as 3.22 km / h. Anything above inevitably punished vigilant guardians of order.

About where you can leave your rental car, just along the road in Bristol tells markings - yellow or red stripes. If they double, then drive through on, because it is a direct ban on parking at any time. But single yellow or red bar indicates that you can stop the car, but only with the observance of the established time, so be sure to find a sign showing. Yellow markings in this case still allows you to drop off passengers, but with the condition that the driver will be in the cabin.

In order not to be subject to not only a fine, but the more severe penalties of deprivation of a driver's license, you must adhere to the following rules:

Forms of punishment for drinking: a fine - up to 5 thousand pounds and / or imprisonment for a term of six months and the withdrawal of licenses.

Cambridge from 18 euros per night

London from 14 euro per day

Liverpool from 22 euros per night

Manchester from 22 euros per night

Oxford from 21 euros per night

Reviews
How to explore Bristol? In a rented car!