Main  /  Top Travel Destinations  /  Rent a car in Liverpool: the city with the wind! 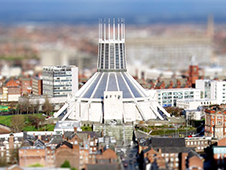 Want to visit the birthplace of the legendary "The Beatles"? Or you are a fan of FC "Liverpool" and "Everton" and intend to visit one of the home games of teams? Liverpool waiting for you to visit. But having been in this English city, we can not leave aside its attractions. That there is only the Albert Dock, which since 2004 is included in the UNESCO World Heritage List. And this is not the only place that is worth a visit. And considering that Liverpool – a rather big city – is the second largest export port in the UK, it is convenient to sightseeing, traveling by rental car. This option allows faster acquaintance with Liverpool and provides an opportunity to meet a lot of interesting places in the short term. Services of our service for rental cars are available to you at any time.

Rules of the road in a rented car on Liverpool

At night, if the road is not lit, do not forget to include a passing light. In addition, it is believed to follow this rule, and if you are moving along the road where the speed limit is set to 48 km / h, or the road - the highway.

In the UK drive on the left, but no one stops to ride on the roads at the wheel of cars with both right and left. But if in your car steering wheel still on the left, then the lights need to seal with a special tape - in order to prevent blinding oncoming drivers.

Allowed tinted glass on the front doors and windshield: light transmission in cars have been registered up to 01.04.1985 - at least 70% after that date - at least 75 head-on, the doors - not less than 70

The vehicle, of course, goes out of the water, so the story of travel expenses must be enabled to pay for fuel.

In the UK, you can refuel with unleaded petrol or diesel fuel. The cost per liter is:

To avoid unexpected costs in the form of fines, it should abide by the rules of the road. But if it really happened, that the offense was committed, then get ready to pull out of the bag:

At the same time a foreign drivers in the UK charges a deposit. Its value is equal to the size of the fine. Another measure is a guarantee of security for liabilities - 300 pounds, which is regarded as a potential fine in court. Deposit or pledge is required to pay on the spot of the offense.

Most often it violated the speed limit. To avoid this possible, if you know the limits established by the standard. For passenger cars, they are:

Bristol from 23 euros per night

Cambridge from 18 euros per night

London from 14 euro per day

Manchester from 22 euros per night

Oxford from 21 euros per night

Reviews
Rent a car in Liverpool: the city with the wind!

Average Rating 4.6/5 , 2176 opinions
zdzislaw zawada
We had a perfect travel around Verona and its suburbs. Everything was very romantic. We went there right after the wedding and rented a car to be free to move. We found a car via booking Car and immediately paid for it without any problems. Upon the arrival we got the car with a full tank. By the way, it was not necessary to return the car to the place where we took it.
Varga Andrea
I visited Moldova to research it. It was this search engine that helped me to find a good car for traveling, because the others simply ignored the country. I booked a rental and paid for it without problems on the site. I got the car easily. I'm satisfied.
Yeloyev Valeriy Vladimirovich
We had a nice trip on the roads of Scotland. There were a lot of small towns and each of them was very cozy. Beautiful nature and lots of greenery. We rented a car at the destination place, while booked it and paid for it via this resource in advance. We were pleased with a wide choice. Particular attention should be given to the fact that the insurance is included in the rental price. There are no additional charges.
VIKAS BAJAJ
We had a great trip to Poland. Most of the time we spent in small towns and farms. Everything was very nice and home-like. The car was rented in advance without a limited mileage. We got the required insurance package without overpaying via this site. We received a car in Warsaw without any problems.
By using our website you agree to our use of cookies in accordance with our cookie policy.
By using our website you agree to our use of cookies in accordance with our cookie policy.