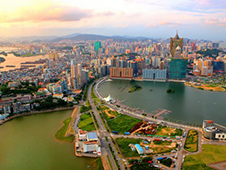 In the southern part of China in the western part of the Pearl River Delta is the city of Macau – Administrative Region with special powers. It is washed by the South China Sea, the city covered landscape 2 islands. There are several large industrial enterprises, however, the basic income the city budget received from gambling and tourism, which have reached a high level here. Considering one of the components of the PRC, Macau, however, has considerable power. It has its own legal framework, emigration, customs system, their own legal, financial organizations.

Urban transport links the city is organized correctly, taking into account the needs of the local population, many tourists who annually flood the center, near Macau. To move through the streets, you can choose public transportation, but the best one would be the rental car. Take a car, you can directly in the Macau International Airport. Beforehand, you can book a vending machine, visit bookingcar.ru. The procedure of registration of cars is carried out from home, online.

If we talk about parking in China, we can say that doing so is in the center of the city, especially in places where shopping, entertainment outlets, is very difficult. Before you visit a part of the city, is to find out where the nearest car park, which is in advance to reserve a place. Overpopulation - a major problem in China. This applies to all cities of the country, including Macao.

In some cases, you can leave the car directly on the street, placing it in the direction of movement. On the first available segment is not necessary to leave the car. Park on Chinese roads best for parking areas, which are marked by a continuous stripe on the pavement.

According to Chinese law permitted rate of alcohol in the blood for drivers of vehicles is 0,2 ‰. Severe punishment awaits him whose degree of intoxication while driving will be higher than the permissible limits. For control of the car while drunk motorist faces a fine of about $ 1,000 to the deprivation of the right driving for a period of 15 days or more.

If the result of drunk driving was a serious accident, the driver threatened with imprisonment for the long term. When the motorist ignores the penalty payment within a month, he will receive 12 points violations. The same number of points threatens him if payment penalty was not paid within 3 months. and more.

The cost of fuel for rented machines in Macau

At gas stations in China can fill the car with petrol, diesel fuel, and in 2015 there is a tendency to lower fuel prices. This is due to the fall in world oil prices, and the fact that China produces a huge amount of their own "black gold".

If we talk about trends in general, with the October 2014 the cost of fuel at petrol stations of the country decreased by 20%. In June 2015, the average price of gasoline in China is $ 1.14. The costs of oil companies at the same time offset by tax increases on consumption of the final product refining industry. Minimum fuel prices were in March-April this year, today it is somewhat improved, that does not significantly impact on China's economy as a whole.

Under the rules of the road, which are fixed by the legislation of China necessarily considered the following items:

When driving the vehicle owner must pay attention to road signs. On the roads of China placed a lot to control the situation in a particular part of the track.

The estimated cost of the rental car in Macau

Average Rating 4.6/5 , 2176 opinions
wayne robert donohoe
I considered a variety of car aggregators and car rental sites. This resource has become the most reliable among others for me. The main point is the lack of redirection when paying, that means the minimum risk of phishing or infection of the computer, which is extremely important for banking transactions and other types of payment. So I strongly recommend the most reliable site.
Vicky Elizabeth Paterson
Among the numerous specialized car aggregators and search engines, this resource shows options that are missed by other resources because of the filters. Several times, I've found the most profitable offers here. Now I use only this aggregator and I'm confident in the quality of the search.
Violeta Eiderman
Of course, Beijing is not for everyone, but I came to my friends in the suburbs and they recommended to rent a car, as it was cheap, fast and safe. I found the suitable option via Booking Car. I booked the car and paid for it in a matter of minutes. I satisfied with the operation speed of the site.
Varga Andrea
I visited Moldova to research it. It was this search engine that helped me to find a good car for traveling, because the others simply ignored the country. I booked a rental and paid for it without problems on the site. I got the car easily. I'm satisfied.
Zakondyrin Alexander
I always travel alone. I get where I need and rent a car. Then I go where my heart wants. I like it very much. Once I failed to rent a car. After that, I began to use the services of online providers. This particular resource suits me best of all. I recommend it.
By using our website you agree to our use of cookies in accordance with our cookie policy.
By using our website you agree to our use of cookies in accordance with our cookie policy.