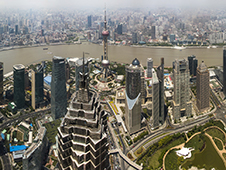 Rent a car in Shanghai

The world's largest metropolis of Shanghai – a city in the east of China, which is recognized as one of the largest trade, economic, financial centers of the country. Its territory is dotted with a network of roads, railways, metropolis recognized the central hub of air traffic. Also in the territory of Shanghai is full of canals, rivers, lakes, streams. Today on the site of the small fishing village you can see a modern city, which is a luxury, a developed structure is not inferior to the rest of the world's largest metropolises.

To enjoy the cultural and historical heritage of the city and enjoy the modern landscape, you can use public transport in Shanghai. Here he is represented by ferry, subway, taxi, bus, magnitoplanom, tram. For greater portability, you can use the opportunity to rent a car. Car rental is possible after arrival at the airport of Shanghai is also allowed to use the services in the city's central office. Order in advance is more convenient to all cars on the site bookingcar.ru, that best protect against problems.

On the territory of the Shanghai high-speed mode is strictly monitored by cameras, which are equipped with many tracks. At least, automatic equipment mandatory for congresses, all the city's intersections. If the permissible speed limit law is violated, the driver in addition to the fine in terms of money away a free point. The allowable number of penalty points - 12 units. If the owner of the car exceeded this rate, he'll have to pass the existing law, and then re-trained driving.

Speed ​​on highways in Shanghai the following:

The deficit of parking for car parking - the eternal problem of the large cities, especially when it relates to China's cities. On some streets of Shanghai, you can leave your car on the street, placing it at the same time the direction of travel. However, for a long time to leave the car unattended should not. For safety reasons it is best to park in the designated parking areas, which are marked by a solid line. When planning a trip to the parking lot for the car is better to think in advance. This question can try to solve in the process of registration of rent cars.

Fines for traffic violations in Shanghai

Violation of traffic rules Shanghai is regarded 12-point scale. If the owner of the car before the end of the year used some points from the beginning of the new year penalty points are canceled. If all points within 12 months. have been used up, it can result in the fact that the owner of the vehicle will be picked up right, appoint their mulligan.

If the driver behind the wheel allowed himself to exceed the rate of 2-3 times, he was fined 12 points, deprived of rights.