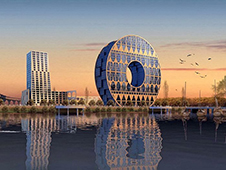 The capital of the province in the southeast of China is the city of Guangzhou. It's not just a repository of unique cultural traditions, mass landmarks, attractions of past eras. Modern Guangzhou – a major industrial metropolis in the heart of which is concentrated the largest machine-building, tractor companies, large factories of chemical, food, light industry, shipyard, which produces vessels plowing the vast expanse of water around the world.

A lot of interesting things for tourists there, and in the vicinity of Guangzhou. In the north-east of the downtown area is the highest mountain, climbing on top of which can be seen at the bottom of a colorful panorama of the city. On hilly terrain metropolis has Yuexiu Park, where fans of active recreation can visit the stadiums, swimming pools, evening enjoy homely teahouses, pavilions. Travel speed travel provide rented in downtown Guangzhou Auto, which can be pre-ordered online bookingcar.ru.

For all Chinese roads are speed limits:

Crosses the territory of China, a total of more than 100 000 km expensive, 90% of which - toll roads. Many of them were built between 1990 and 2000, during which time a fully paid for itself. Fee for travel on the toll road in China - one of the highest in the world. The official figure annual fees for the ride is about 45 billion. Dollars. If we talk specifically about Guangzhou, the fee movement on the motorway here is the following:

China is unique not only in history, many cultural traditions, national characteristics. Here, all original, even its own system of road signs, the state adopted legislation. It is characterized in that it comprises the following groups of characters:

Moving on Chinese routes can often find unusual signs with large graphic drawings. They are very similar to social advertising, but the information on them encourages drivers to remain alert while driving. They can read the requirement to wear seat occupant seatbelts, stop drinking alcoholic beverages while driving, talking on a cell phone without a special headset.

The National Commission after the fall of fuel prices since 01.27.2015 has reduced the cost of diesel fuel per 350 yuan, gasoline - 365 yuan. Thus, when recalculated per liter of petrol with an octane rating of 90 fell by 0.27 yuan / liter, diesel fuel - by 0.30 yuan / liter. Today, the cost of gasoline in the capital regions of China are as follows:

This is due to global trends of declining oil prices, the fact that the country remains one of the world's largest miners of their own "black gold". To date, in June 2015, the average price of gasoline at gas stations China is $ 1.14 per liter.

Reviews
Features traveling in a rented car in Guangzhou