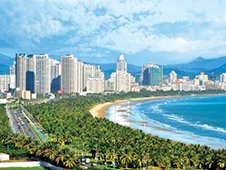 On the coast of the South China Sea stretches the picturesque town of Sanya, which attracts tourists with an abundance of beaches, an ideal air quality. The special microclimate here is explained there that in the city, outside the small industrial enterprises. It provides the perfect purity of the coast, azure waters, the air is literally permeated with sunlight. In terms of environmental Sanya is ranked 1st in China, 2 – in the world.

Tourists who are lucky enough to have a rest in Sanya, like many festivals that take place here every year. In addition, travelers are attracted by mild climate, plenty of beaches with golden sand, the opportunity to enjoy tropical fruits, an abundance of food from the depths of the sea. To move around the city of Sanya with maximum comfort, it is necessary to rent a car. Wide range of cars all over the world can be rented on site bookingcar.ru.

Rules of the road for cars rented in Sanya

The main feature of modern Chinese roads - speed, the randomness of various types of transport. After all, on country roads, in addition to the car, you can see the motorcycles, scooters, buses. There are constantly scurrying pedestrians at designated areas, there is a huge number of rickshaws, which are considered the most simple, affordable way to travel anywhere in the city. What must be remembered motorist when visiting Shenzhen:

The roads in Chinese cities are of high quality, although there are times when there are two routes, one of which is new, the second - the old with poor coverage. Speaking on speed on the highway Shenzhen, is to comply with the following parameters:

Sanya, as well as other cities of China, can not boast of having free parking spaces in the city. This issue is solved in how documents are made for hire cars. If it does not, it is necessary to find a paid parking. The car can be parked on the street and just by placing it in the direction of motion.

However, free parking is fraught with consequences, is highly undesirable, especially for visiting tourists. It is worth remembering that the most difficult to park in busy areas where scattered many shopping centers, places of entertainment. It is advisable to visit these areas in advance to pick up a car parking space in a nearby neighborhood.

Fines for traffic violations in Sanya

Speeding at 10-20 km / h is considered to be on the Chinese road commonplace. It may be due to the fact that not all the way movement of vehicles in China are equipped with radars, automatic camera tracking. If the equipment is, the driver notify the road sign. The penalty for speeding in Sanya high. If the driver exceeded the limit by 20 km / h, it will cost him 2000 yuan.

For serious violations of traffic rules are provided penalties, besides all the mistakes on the road is estimated at a 12-point scale. For some missteps while driving a car, the driver can immediately make up 6 points penalty. Such violations include travel by car while being at the traffic lights warning lights yellow, or red light.

Drinking and driving in Sanya will cost the driver a fine, the amount of which sometimes reaches 6000 yuan. Also, careless motorist can be arrested for 15 days. If there is a serious accident, the sentence is increased by several times. If the driver ignores the payment of the fine, it would cost him 6 points. A similar number of points will be removed for late payment at 3 months. and higher. Select a car can at forging license plates of the car if there are 5 of unpaid fines, the owner of the car made a flight from the scene of an accident.