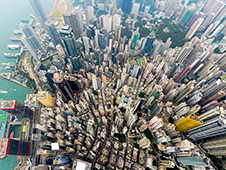 Administrative Region of China Hong Kong – one of the leading financial, cultural centers and is located approximately 60 km from Macau. Its territory includes the island of Hong Kong, Peninsula New Territories, Kowloon, Lantau Island, plus more than 250 small islands. This is a highly urbanized area, which also boasts an abundance of parks, areas of landscaping, flower beds. This is due to the desire of the authorities to provide in the densely populated region of the optimum environmental conditions. Much of the landscape of Hong Kong is still a virgin, untouched.

These areas are located mainly in the areas covered by steep slopes, hills. About 40% of urban land is considered to be natural reserves in places that are declared ecologically clean area with an abundance of recreational areas for the local population, visiting tourists. Urban, suburban Chinese way of a fairly high quality. A car rented at the airport, the center of Hong Kong is considered the best means of transportation for the modern streets, squares and alleys. Reserve a car can advance using the online order form on the website bookingcar.ru.

Indicators of the maximum speed with which you can navigate the roads of China, depend on the type of track on which the car is moving:

The Chinese have bad adhere speed mode, which is explained by the fact that on many routes cameras are simply not available. However, the worst offenders Roads Kong not usually exceed the speed is not more than 10-20 km / h. If these limits are violated, the driver will pay a fine, the amount of which can be up to 2000 yuan, confiscation of right to drive cars. Especially for repeat offenders guilty of a serious accident disempower, could be sentenced to prison. Also, Chinese law provides for the following penalties, restrictions:

Driving on roads in Hong Kong drunk strictly suppressed by law. The driver, who allow themselves to manage the car while intoxicated will be fined about $ 1,000. Also, he could be arrested for 15 days, and if a serious incident it may limit the period of stay in the wild up to 6 months.

If the fine remains unpaid during the month, the driver automatically assign 12 penalty points. The same danger to motorists at a delay of payment of a fine of more than 3 months. Also, the draft amendments to the laws of China threatens drivers loss sums up to 5000 yuan, deprivation of the right to drive vehicles of up to 10 years. Persons who have become parties to the accident, the cause of which was alcohol intoxication, may lose their rights for life.

Hong Kong - a major Chinese metropolis where parking is a problem as acute as in other cities of the country. When renting a car, it is desirable to discuss the matter in advance, to determine the parking space before the end of the trip. The car on the streets can be left anywhere on the street, but it is fraught with unforeseen situations. It is desirable to find a parking space by the hour, the location where the sidewalk is limited by the solid line.

Some of the rules of the road in Hong Kong plunged into a stupor Europeans.

If we talk about the quality of the roads, the best recognized as a national highway. They are distinguished by a large extent, the high quality coating. On many roads you can travel at speeds up to 110 km / h, but in this case we should not forget about the road signs that indicate about the rules of movement on the track.

Average Rating 4.6/5 , 2176 opinions
Zakirova Albina
When we went to visit sunny Spain, we decided to do it by the car to see more sights and not to spend time sitting in the hotel. We searched for cars via several car aggregators, until we found this one. The most complete sample and very profitable offers. Despite our worries, everything was fine.
YASIR HASSAN A ASIRI
I fell for a spontaneous desire and went to cities of France by car. I rented a car via this car aggregator, which has all offers from the well-known providers. There are wide choice, advanced options, payment on the site. Everything works stably and clearly. There were no problems with the car receipt and return. I recommend this resource to those who like to organize travel by themselves. By the way, everything is quite affordable.
Zuzana Pudelska
During my business trips to other countries I travel a lot. Car rental has become an excellent solution for me. Since it is not always possible to rent a car quickly at the place of destination, I rent a car online. I\'ve tested many sites. Most of all I like bookingcar. The site always works good. There is a lot of options from a wide variety of providers. It\'s everything I need.
wilhelm gloger
Car rental is suitable only for experienced drivers, as not everyone can drive in Rome. Nonetheless I\'ve decided to visit this ancient city by car. By the way, it is very interesting and unusual. It is easy to see the city from unconventional angles, inaccessible to tourists. I\'ve rented a car via bookingcar.eu. I\'ve liked the fact that the base cost\'s included insurance and other options that are necessary in a city with intensive traffic and a peculiar driving style.
By using our website you agree to our use of cookies in accordance with our cookie policy.
By using our website you agree to our use of cookies in accordance with our cookie policy.