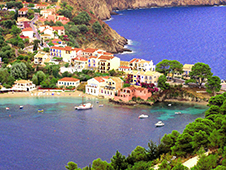 Car rental in Kefalonia from 12 € per day

Kefalonia – is a Greek island with beautiful golden beaches, developed tourist infrastructure and lots of sights that always attract travelers and holidaymakers from around the world. Kefalonia is the largest island in the Ionian archipelago, with an area equal to 671 square meters, and the length of its coastline is 250 kilometers.

The main resort towns are settlements of Kefalonia Lassi, Liskuri and Scala, and the sights and monuments of history and architecture are located completely around the island. Before most of them, except that you can reach by car. In addition it should be noted that public transport in Kefalonia is represented mainly by buses and taxis, and if the first run only on the schedule, the second can fly into penny outdoor enthusiasts.

That is why the majority of tourists coming to the island, prefer to use a service like car rental. This can be done in minutes using the service bookingcar.ru. Rental car not only give freedom of movement, but will have fun, without regard to the time of day and weather.

In general, it should be noted that on the island of Kefalonia acts rather rigid rules of the SDA. Penalties according to the seriousness of the violation can range from a few hundred euros to seizure and confiscation of the vehicle for up to one year.

Talking about the cost of fuel on Kefalonia, it should be noted that gasoline, here, as in fact in the whole of Greece is one of the most expensive in Europe. On average, a liter of gasoline will have to pay about 1.7 euros, depending on the brand and the owner refueling. Therefore, renting a car, it is best to pay attention to the small and compact models with minimal fuel consumption.

On the Kefalonia are the standard for the entire euro area speed limit:

Generally in Kefalonia fare is paid only for bridges and tunnels, and all other sections of the route are absolutely free, but despite this, the roads are in excellent condition. The average toll sections will cost between 2 and 4 euros, depending on their length. Cash paid directly to small coins before entering the paid section.

Reviews
Rental vehicles on the island of Cephalonia

Average Rating 4.6/5 , 2176 opinions
Zuzana Pudelska
During my business trips to other countries I travel a lot. Car rental has become an excellent solution for me. Since it is not always possible to rent a car quickly at the place of destination, I rent a car online. I\'ve tested many sites. Most of all I like bookingcar. The site always works good. There is a lot of options from a wide variety of providers. It\'s everything I need.
Valeriy Khomutov
We drove along the main routes of South Korea for business and information purposes. For greater comfort and freedom, we rented a car. The rental was issued and paid for via the website. At the destionation place about the agent gave us the car without many words. The resource operates very well.
zuhair rady almousa
I've organized travels by myself for many times. Usually I prefer Europe with its comfort and quality service. I adore to drive a car. I've found this excellent car aggregator long ago and now I always use it. I've visited many countries. And the site always helps me. It's a very useful resource. I recommend it to everybody!!!
Wilhelmus Theunisz
We decided to visit the festival of Czech beer and our big company went there. In order to manage to rent a car (our non-drinking friend constantly drove the car, we took him only for this purpose). The cost for six persons was cheap. We rented a car and paid for it via this site. We got a 7-seater car without any problems and difficulties. We returned it also quite easily. I recommend it!!!!
Violetta Inozemtseva
I traveled all over the Baltics for business purposes. To save money, I decided to rent a car. In advance I found a suitable car and paid for the rental. I got it upon the arrival. I don't have any complaints about the reservation service and the rental company. I'm absolutely satisfied, as I managed to do everything I planned due to the mobility.
By using our website you agree to our use of cookies in accordance with our cookie policy.
By using our website you agree to our use of cookies in accordance with our cookie policy.