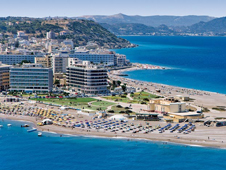 Car rental in Rhodes from 16 euros per night

Rhodes is a fertile island and the city, located on the territory of Greece. Apart from its historical significance, Rhodes is very popular among tourists. Looking beautiful beaches? Vintage architectural masterpieces? Souvenir shops? Here everyone will find something of their own. The tourist season in the city prevails cloudless and mild weather – the sun shines its rays of 300 days a year.

Most of the beaches – pebble, not sand. Despite this, they are clean and aesthetic appeal, and perfect for swimming. The single most important drawback is the excessive beautiful island tourists (especially in season).

For an even more comfortable journey through the city, you have the opportunity to arrange car rental in the airport of Rhodes or one of the central parts of the city. To do this, visit bookingcar.ru, and order.

Rhodes inspectors traffic police in violation of the rules can not charge a fee on the spot. Police detained the driver will issue a receipt - you can pay at any bank in the region, which has been fined. If the fine is paid quickly, that is, within ten days, you can use the 50 percent discount. In case of delayed payment amount may increase several times.

On the island of Rhodes are the same speed limits for vehicles, as well as throughout the state:

It is worth noting that the Greek drivers often violate speed limits, which resulted in Rhodes, Greece in particular, a leader in the number of road accidents.

As in all large Greek cities, in Rhodes's hard to find a parking space, without receiving a receipt of a fine on the windshield. Do not save, leaving his car in the non-smoking areas. If there is no free parking nearby, it is necessary to put the car on a paid parking lot. Large parking lots are located near the port, but the way to nearby attractions - not close.

Parking cost is different everywhere. It depends on the distance from the parking lot of the downtown area, as well as the time of day and day of the week. The driver can smile luck and he put the car for an indefinite period of 3 euros, and it so happens that you have to pay the same money, but for an hour of parking. If a section of the street is marked with blue and white stripes, so it is possible to leave the car. This blue color announces a paid parking lot, white - for free. The yellow line indicates the prohibition of parking. The average cost of parking is 1.5 euro per hour.

Many parking charge largest amount of funds for the first hour of parking the car, then - cheaper.

In the body of the driver's alcohol level is 0.5 ppm. If you find that this rate is exceeded, for this may be followed by severe penalties, as a result of which you can lose the rights for 3 months and lose 700 euros. If the index is in the range of 0.5 - 0.8 ppm, the person responsible will write a fine of 200 euros. More than 1 ppm - 1200 euros (and possibly imprisonment for up to two months). In the case of recurrence of the driver will be deprived of the rights for five years and will write out a receipt for 200 euros.

For drivers who have recently received the right (length less than two years), allowed rate of alcohol is 0.2 ppm.

The basic rules that need to know the drivers in Rhodes:

Taking advantage rent a car in Rhodes, drivers can fill up the 98 th or 95 th gasoline and diesel fuel. Leaded gasoline is not here. To carry fuel for a car in the canister is prohibited. As an island of Rhodes, then the fuel cost is slightly higher than in other parts of Greece. This is due to the road transport fuel from the mainland to the island. Rhodes, many charging closed at seven o'clock in the evening, but there are stations around the clock.

On the territory of Rhodes have road tolls which are required to make payment. On each of the toll stations have to pay an average of 3-4 euro. It should be noted that the cost of payment is dependent on the category of the vehicle. Cars belong to the second category, provided that their height does not exceed 2.2 m. On cars without a trailer will be charged the lowest fee for admission. Drivers have the opportunity to pay cash road or electronically, depending on the particular pay-section.

The estimated cost of the rental car in Rhodes

Average Rating 4.6/5 , 2176 opinions
volodimirs pupko
Be sure to rent a car when traveling around Germany. See the quality of their perfect roads with your own eyes. I looked for options, chose and paid for a car via this resource. I found the right option quickly. The price wasn't very expensive, and there were a lot of advantages when traveling. I recommend it, try it! I think I'll continue to use this site. Considerable saving of time and money.
Vicky Elizabeth Paterson
Among the numerous specialized car aggregators and search engines, this resource shows options that are missed by other resources because of the filters. Several times, I've found the most profitable offers here. Now I use only this aggregator and I'm confident in the quality of the search.
Vitalii Miliaiev
We had an excellent trip to the Cote d'Azur. We visited small towns, which were calmer and cheaper. We traveled by a rented car. We booked a car and paid for rent via this resource. It's very convenient and inexpensive. We chose a mini-car, so we spent money on rental cost and fuel.
Wojciech Cipilinski
I traveled along the roads of Andalusia. It was my dream. I visited several cities, including the beautiful Seville. I rented a car via this resource. When booking, I liked that I would take it from the airport, and leave it in any place convenient for me. The cost was more than affordable, especially since the full package of options was included in the base cost. I want to thank the site, it helped me very much and released from overpayment.
By using our website you agree to our use of cookies in accordance with our cookie policy.
By using our website you agree to our use of cookies in accordance with our cookie policy.