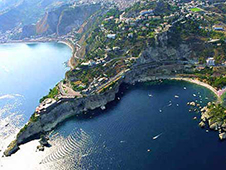 Resort town in Italy called Taormina has a long history. All over the world it is known as the concentration of artists, writers and other creative professions, as every year, in summer, there is a festival of the arts. All activities are held in Taormina Greek Theatre, around which the city was formed.

While vacationing at this resort, you can spend time on the beautiful beach, enjoy the sights, spend time shopping trips, etc. And in order to spend the least time on the move, you can take advantage of car rental in Taormina, and pick up a reserved site with the help of bookingcar.ru transport in the city center.

Are you going to rent a car in Taormina? Be sure to read the basic traffic rules, which operates in the city:

For each type of road in Taormina, as well as throughout the country, provided the standard speed limit:

Parking of vehicles leased in Taormina

Italian city car parks and a variety of different Taormina - is no exception.

The types of sites:

Underground parking - the most expensive. There is always a free space, which is engaged in the search for personnel, not the driver. Free parking found near the shops, shopping malls, toll - close to major attractions.

In the country the average price of gasoline - 1.7 euro diesel - 1.5 euros. In Taormina common self-service gas stations. Refuel them more profitable due to lower fuel prices. The cheapest is considered 95th gasoline called Super senza Pb. For transport, which runs on gas, are provided with appropriate filling of LPG.

Average Rating 4.6/5 , 2176 opinions
Yoav Yogev
Recently I've toured Hungary. I've got amazing imressions and memories. I've rented a car. It's been very cheap taking into account unlimited mileage, full package of inclusive terms and ability to return the car in another place. Such luxurious conditions could be found with the help of this car aggregator. I recommend it, because now I use it constantly.
Valeri Udler
We had a great time in England. Despite the difference in the traffic direction, we got used to it quickly. Naturally, we rented a car via this site. Payment was also made via the electronic resource. There weren't delays or negative experience during the car receipt. I liked everything very much.
Vladimir Mats
We returned from Copenhagen. To be well-travelled on the trip and save money, we had rented a car. Before the flight we found a suitable car and paid for it via this site. We got it at the airport, where we were met by a representative of the provider. There were no difficulties or worries. Everything was great.
Vladimir Shmidt
We had a wonderful trip along the evening desert while traveling to Dubai. We rented a car at home in advance via the site Bookingcar. We decided to do it due to the peak season of such trips in order not to remain without a car. There were no problems or difficulties in obtaining or returning the car. Everything was perfect!
Zhuravlev Fedor
Do you know that you can afford a lot and do not dpend much while traveling? I've already traveled with comfort for several times. During the last trip I rented a luxury car. I had a great time, and the rental cost for 2 days with unlimited mileage was quite affordable. I rented via this resource, and its standard cost included various options such as insurance and others. It's nice to be up to the mark.
By using our website you agree to our use of cookies in accordance with our cookie policy.
By using our website you agree to our use of cookies in accordance with our cookie policy.