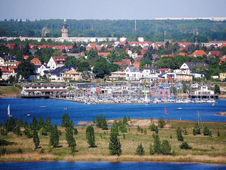 Tourists while visiting Saxony necessarily call in Leipzig, one of the largest cities in Germany, in which modern life is entwined with the cultural heritage of the past centuries. The town is popular museums, unique architectural structures. Leipzig is also famous for its annual fair, where visitors come from all over the world. Also, tourists must visit the local gallery of modern art, Daetts Center, Museum of History.

Leipzig has an international airport, railway station, a dense network of transport roads, which helps to easily get anywhere. It is a large market town, which has a University, a well-developed trade. Navigate through the streets on foot, on public transport. The best option – to rent a car at the airport in Leipzig, at the railway station, in the city center. It is more convenient to book a car in advance, as soon as the planned trip. Best of all – apply for a car online, online bookingcar.ru.

The cost of fuel for the rental car in Leipzig

In Germany you can transport gasoline canisters, without fear of legal penalty. In addition, the country is very popular E10 gasoline, costing 1.49 euros per liter. The fuel attracts quality / price, but the quality is suitable only for those cars whose engines are suitable for gasoline this brand. Refills for many Leipzig, almost all the same prices the cost of fuel for 1 liter is:

On the streets of Leipzig you can find different kinds of parking. There are free, places are almost always busy, there are areas on which the park can only locals. Some parking enough to have a parking disc. It costs only 2 euros, sell it at gas stations in nearby kiosks. The disc is set within a car so that you can see the time of arrival. Place it so as to ensure the visibility of the object under the windshield.

In most car parks are parking machines. In them, for a trifle, you can pay for parking place for 30 minutes. and more. The fine for parking - a strict, payable on location or in the courthouse, but in the larger sizes. The following fines:

What is the allowable speed of the car, rented in Leipzig, indicate signs. If they are not, you should focus on the rules of the road, which are enshrined in German law:

The car, which is equipped with a chain wheel-slip on wet, icy roads, provided the permissible speed limit not exceeding 50 km / h.

Rules of the road in Leipzig

On the roads in Germany is unacceptable to move in a car with glasses, the degree of light transmission is less than 75%. Lateral and front glass thus should have light-transmitting capacity within 70%, no less. By the laws of non-compliance leads to the creation of an emergency on the road. As a result, the driver is facing the loss of a car until the cause of the deprivation of rights driving.

Road travel Leipzig involves the use of seat belts for the driver and passengers. If the rule is not respected, will have to pay a fine of 30 euros. To pay the sum of EUR 60 driver may if he was talking on a cell phone while driving the car. Using communication is permitted only with a headset that allows you to talk without hands.

Fines for traffic violations in Leipzig

Failure to comply with traffic rules entail payment of the fine. Make it desirable in the place, paying cash, a bank card. If the driver does not want or is unable to pay, the case is referred to court. The question to be solved in this way, penalty turns on a large scale.

Reviews
Rent a car in Leipzig