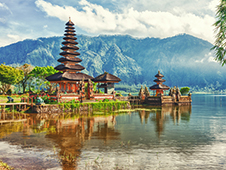 In the west of New Guinea, covering the Moluccas, large and small Sunda Islands, lies the island nation of Indonesia. Total its territory includes 13,667 islands, populated and among them are considered to be slightly less than 1 000. The others are atolls, rocks, at the foot of which are full of life the inhabitants of the deep sea. The state capital – Jakarta, whose residents mostly profess the Muslim religion. The main means of transportation in Indonesia are considered highways. According to him the tourist can get anywhere. If you have the right to drive international standard, insurance, bank card, it's best to rent a vehicle.

Machine in Indonesia easily rented at many points. This can be done on the territory of the airport of Yogyakarta, Denpasar, Lombok, Jakarta, Surabaya, Kuala Namu, Sultan Hasanuddin, Hang Nadim Int`l Airport Batam, in the heart of Surabaya, Jakarta, Makassar, Denpasar, Medan City, Harbor Bay Ferry Batam, Yogyakarta , Batam Center Point Ferry Batam, at the railway station Train Station Medan. This issue is best addressed before the trip, booking a car online bookingcar.ru. By the way, if there is no confidence, driving experience, is for a fee, order a car with a driver.

The cost of fuel for cars rented in Indonesia

Indonesia is literally dotted with roads, gas stations, where you can buy petrol, diesel scattered everywhere, while a liter of fuel for the driver to pay a fixed amount:

Motorcycles, cars of different configurations - the usual means of transportation on the roads in Indonesia. Parking spaces are in each city, settlement. They can be found in airports, parking lots, near markets, shopping malls, squares. The resorts also solved the issue fairly quickly. Areas adjacent to the attractions of Indonesia, is sure to have parking spaces for visitors. Parking fee depends on the time that the car is left there hourly, per diem parking.

Leave vehicles at a time can be in the designated areas, which are marked in blue. Where you can park your car for a maximum of 1.5 hours. If the parking lot is marked with green paint, you can leave the car here for a longer time. Areas marked in red are not intended to park the car. Traffic police, found a violation, has the legal right to require the driver to pay a fine for stopping the machine to the banned site.

Traffic on the slopes of Indonesia the left. Traffic rules enshrined in law, but in practice they are ignored. This confirms the sad statistics. Every year on the roads of the country killed a lot of people, the death rate from road accidents are considered one of the main problems. Condition of roads in Indonesia is poor. The central route, the roads near large cities, resort centers are good. If you call a little deeper, closer to the province, you can see the type of coating is very deplorable.

Road signs that prohibit, limit and other signs in the country is clearly not enough. Not better things with markup. This is the same route during the day can be one-way in the morning, in the afternoon - to become bilateral. The traffic control did not even bother to mark the exact time of the change of movement. On top of that the road can be free to leave pets, wild representatives of the local fauna.

Fines for traffic violations in Indonesia

Indonesia - a country where some road sections must be paid. Directions on such routes inexpensive, is, for example, within the Jakarta from $ 0.5 to $ 1. To manage traffic, the driver will need the right international format. If not, the inspector will issue a mandatory penalty, which can reach $ 230-250.

Reviews
Car rental – the best option for travel in Indonesia

Average Rating 4.6/5 , 2176 opinions
Valentina Savchenko
I went to Nevada. Of course, I rented a car via the website. The final cost turned out to be very modest, which gladdened me. Among all the search engines, this one showed the most profitable offer with a full insurance package for the minimum price. I chose it and paid for it via this site.
Vicky Elizabeth Paterson
Among the numerous specialized car aggregators and search engines, this resource shows options that are missed by other resources because of the filters. Several times, I've found the most profitable offers here. Now I use only this aggregator and I'm confident in the quality of the search.
Yulia Koshkina
We have been traveling around Europe for several years with the whole family and only by car. We have a great time when renting a van and driving along the most interesting places and excellent roads. We always use this site. We've seen countries not from the tourist, but from the most ordinary, but interesting point of view. The car aggregator always helps us. It is convenient to pay for the reservation on the site.
Zofit Messa
I can't imagine a journey without a car. It's awful to drive by bus. I often use car rental services and arrange everything via this resource. Quite often I get excellent price offers when renting executive cars. I like direct payment without any redirections and lots of offers. Support service works promptly and efficiently at any time of the day, which is also a definite advantage.
By using our website you agree to our use of cookies in accordance with our cookie policy.
By using our website you agree to our use of cookies in accordance with our cookie policy.